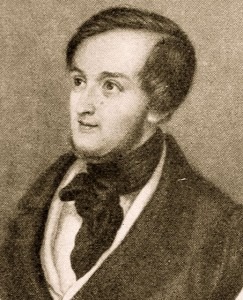 Richard Wagner was one of the most important and controversial figures in the history of nineteenth-century music. He single-mindedly pursued his artistic aims with ruthless determination in his public and private life as well as in his many critical and theoretical writings. Yet, for all intents and purposes Wagner was not a particularly talented or gifted as a musician. His first piano teacher bluntly told his young charge that nothing would ever come of him. Richard was furious, but later recalled, “Of course, the man was right…In all my life I have never learned to play the piano properly. Thenceforth I played for my own amusement; nothing but overtures with the most fearful fingering. It was impossible for me to play a passage clearly, and I conceived a great dread of all scales and runs.” During his teenage years Wagner also took instruction in the rudiments of harmony without gaining a real foothold in composition. He finally decided to take proper lessons with Theodor Weinlig, cantor of St. Thomas in Leipzig. Apparently, young Richard violently rebelled against exercises in counterpoint and canon, but in the end composed a number of piano sonatas.

Richard Wagner: Piano Sonata in A Major, Op. 4
His first effort in the genre was published by Breitkopf und Härtel, but the Sonata in A Major, Op. 4, originally composed in 1832, was published only in 1960. Originally Wagner cast the work in four movements, but in the end eliminated the fugue movement. From the opening theme, the shadow of Ludwig van Beethoven is everywhere. The slow movement offers two captivating melodies, and the Finale is a high-spirited affair in the manner of Carl Maria von Weber. Wagner eventually recomposed the first two movements for a symphonic project, which he ultimately abandoned in 1834. The proud creator of the “total artwork,” combining poetry, scenic design, staging, action and music would later distance himself from his early compositions by declaring them “mere plagiarisms from my youth.”