In Tune Arts
Miguel de Cervantes (1547-1616)
“In Order to Attain the Impossible, One Must Attempt the Absurd”
by Georg Predota September 19th, 2022 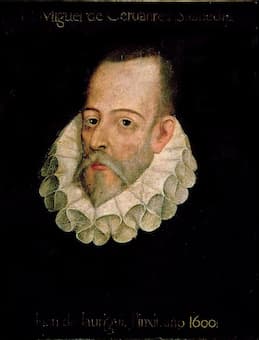 “One man scorned and covered with scars still strove with his last ounce of courage to reach the unreachable stars; and the world will be better for this.” This line from Don Quixote could well have originated from the biography of its author, the Spanish novelist, playwright and poet Miguel de Cervantes. While losing his left hand in the battle of Lepanto and being held for ransom in a prison in Algiers, Cervantes found his hero in a 16th century Spanish noble who left home to right the ills of the world. 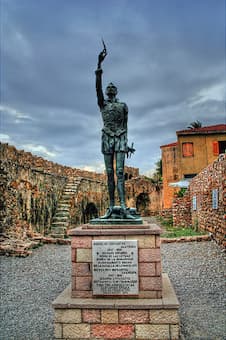 Don Quixote de la Mancha is a middle-aged gentleman passionate about reading. In fact, he turns into a bumbling knight who is unable to separate reality from fiction, and he imitates his admired literary heroes to find new meaning in his life. He takes up his lance and sword to defend the helpless and destroy the wicked, and in the process aids damsels in distress and battles giants, mostly in his own head. The adventures of this most important and celebrated figure in Spanish literature have been translated into more than 60 languages. The novel has been critically discussed since the 18th century, and “the figure of Don Quixote and Sancho Panza are probably familiar visually to more people than any other imaginary characters in world literature.” And as music lovers we all know that the novel has inspired a flood of musical interpretations. 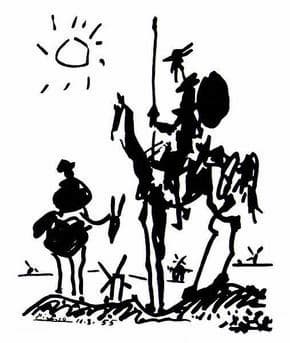 Sketch of Don Quixote by Picasso

Miguel de Cervantes was probably born on 29 September 1547 in Alcalá de Henares, in the Community of Madrid. His father was a barber-surgeon who set bones, performed bloodlettings, and attended lesser medical needs. When his father fell on hard times, the family moved from town to town and the aspiring author might have studied under the Jesuits. We do know, however, that he published his first poem, on the death of Philipp II’s third wife, Isabel de Valois, at the age of twenty-one. In the same year, Cervantes left for Rome, possibly because a warrant for his arrest had been issued that condemned him in absence to having his right hand cut off and to be exiled from the capital for ten years for wounding a man. Once in Italy, Cervantes served in the household of Cardinal Giulio Acquaviva, and by 1570 he enlisted with a Spanish regiment stationed in Naples. On 7 October 1571, at the battle of Lepanto, Cervantes fought in the center of the conflict and received two gunshot wounds in his chest, and a third maimed his left hand for the rest of his life, as he later remarked, “for the greater glory of the right.” Once he had recovered, Barbary pirates captured the ship taking him home, and “Cervantes was sold into slavery in Algiers.” Recognized as a man of importance, Cervantes made several attempts to escape, but he was only ransomed in 1580. 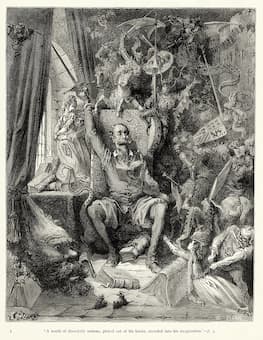 Don Quixote goes mad from his reading of books of chivalry

During his time in captivity, Cervantes wrote the “Captive’s Tale” in Don Quixote and two Algerian plays, El trato de Argel (“The Traffic of Algiers”) and Los baños de Argel (“The Prisons of Algiers”). By 1582 Cervantes was engaged in various literary pursuits, and his marriage to Catalina de Palacios gave rise to the first literary work to bring him public notice. Galatea was a pastoral novel, and according to critics “exhibits a certain power of inventiveness and some depth of real emotion.” He next turned his attention to drama, but lacking dramatic instinct and never mastering the details of the technique of dramatic art, the author was never able to derive a comfortable income. Cervantes simply wasn’t able to make a living from literature, and instead earned his money collecting taxes and trading in grains. He frequently had to borrow money and found himself in hot waters with moneylenders and tax officials, and he even spent some time in jail in Seville. During this time of hardship, Cervantes published occasional poems and the idea of writing Don Quixote occurred to him in prison. The first part was printed in 1605 and immediately spawned imitators forcing Cervantes to produce his own continuation, the “Second Part” in 1615. 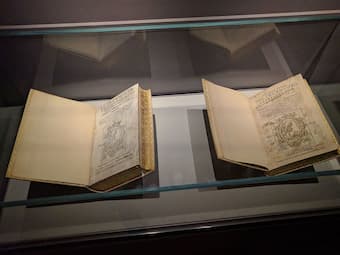 In 1614 Cervantes published a collection of tales written over a number of years. He also published a number of “Interludes,” described as little dramatic trifles not wholly negligible, and a novel of adventurous travel shortly before his death in 1616. A good many critics regard Don Quixote “as a symbolic, didactic or controversial work intended to bring about radical reforms in church and state.” It is doubtful, however, that neither contemporaries nor Cervantes himself would have harbored such intentions. 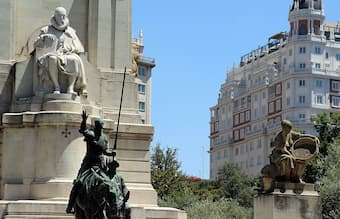 Statue of Cervantes in Madrid

It is entirely more plausible that “his main object was to ridicule the romances of chivalry, which in their latest developments had become a tissue of tiresome absurdities. It seems clear that his first intention was merely to parody these extravagances in a short story; but as he proceeded the immense possibilities of the subject became more evident to him, and he ended by expanding his work into a brilliant panorama of Spanish society as it existed during the 16th century.” Literary historians consider Don Quixote one of the most important books of all time, “and often cite it as the first modern novel.” English writers rediscovered Cervantes in the mid-18th century and Sigmund Freud claimed to have learned Spanish by reading Cervantes in the original language. Be that as it may, the character of Quixote “became an archetype, and the word quixotic, used to mean the impractical pursuit of idealistic goals, entered common usage.”