In psychology, empathic accuracy refers to how precisely a person can infer the thoughts and feelings of another person. Contrary to popular urban myth, women do not seem to possess superior empathic abilities to men. Mind you, Peppina Verdi did not have to rely on woman’s intuition at all, as her husband Peppe simply forced her to accept Teresa Stolz as part of the domestic arrangement. When Teresa first visited Sant’Agata, Peppina confided in her diary, “This is without doubt the saddest moment of my life. Signora Stolz arrived today. She is still very beautiful. Darkness, darkness, nothing but darkness ahead of me.” Peppina was jealous and deeply hurt, but concordantly terrified of loosing her husband. Teresa in turn was eager to cultivate a friendship with Peppina as she did not want to loose Peppe — predominantly for professional reasons — either! And Giuseppe was smugly sitting in the middle and feeling pretty good about things.

He certainly wished for Peppina to be happy on his behalf, because after all, Teresa had brought happiness into his life. He once remarked to a friend, “how ridiculous that Peppina is jealous of Teresa! Every time she visits me, she brings vitality and big smiles!” Since Peppina was not inclined to confront the situation head on, she initially adopted a “wait and see” attitude in hopes that her rival would go away sooner rather than later. Teresa, however, was in no hurry so Peppina tried to find a fiancé for Teresa, a suggestion her young rival simply laughed at. On occasion, there was some friction in the household, and after a somewhat heated disagreement — Teresa and Peppe had partied the night away — Peppina wrote: “By now you will have arrived at Florence where I think it best to address this letter. That you love us I know, or rather we know, we believe it, we rejoice in believing it, and we have faith that in you we will never be disappointed. That we love you, you know, you believe it, you rejoice in believing it, and you may be certain that towards you we shall continue the same as long as we live. So, my dear Teresa, that fear of ‘being in the way’ because you saw in me a touch of sadness, is a fear to put by that which made you, for fear of disturbing us, go to your room almost at sunset with the famous phrase: ‘If you’ll excuse me, I’ll retire.’ You are never too much with us as long as you and we remain the honest, loyal hearts we are. With this and a kiss I close the paragraph.” For a while thing stayed relatively calm, and the uneasy threesome even went on summer holiday together. Peppina even suggested that Teresa buys a little villa near their home in Sant’Agata. That way, the affair between Teresa and Peppe could at least be carried on discreetly, and Peppina could keep a close eye on things. 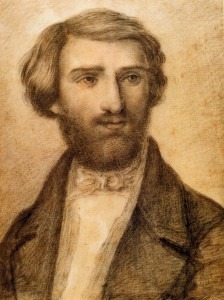 However, when Verdi traveled to supervise the productions of his operas, he always took Teresa and not his wife. On one such occasion — the premiere performance of Aida in Paris — Peppina foolishly decided to surprise her husband and Teresa. Of course, there was no surprise, just the same old, same old! Peppina drafted a curt letter to her husband, which in the event, she never mailed. “It did not seem to me to be a suitable day for you to visit a lady who is neither your wife, daughter, nor sister…for as the lady is neither sick nor about to give a performance it seemed to me you could go twenty-four hours without seeing her, especially since I had taken the trouble myself to go up to her room to ask after her, which I told you as soon as I returned. Since 1872 there have been on your part febrile periods of assiduity and attentions that could not be taken by any woman in a sense more flattering. I know how I have always been disposed to love her openly and sincerely. You know how you have paid me back: with hard, violent, wounding words. You cannot control yourself, when I open my spirit to the hope that you will see this lady and things as they are. Be frank and say so without humiliating me with such excessive deference.” Instead of actually communicating her feelings to her husband — which in the event would not have mattered anyway — everybody stayed for three months in the same hotel in Paris. Things came to a head upon their return to Sant’Agata, however. Peppina ordered Peppe to send Teresea away, “let’s end this once and for all,” she wrote. “I think sometimes I, your wife am living à trios. I have the right at least to your respect, if not to your caresses.” Verdi heatedly responded by threatening to kill himself if Teresa left. In the end, it was Teresa who made the decision to leave, aided undoubtedly by a lucrative engagement in St. Petersburg. Twenty years past, and after Peppina Strepponi’s death in 1897 Teresa Stolz once more became Verdi’s constant companion. Unlike Aida, however, Verdi was buried next to his wife, and not his lover.