The first time I heard Paul Lewis was on a CD. It was a recording of Schubert’s Winterreise. I am ashamed to admit that I had never heard of Paul before, and the reason I bought the CD was actually to hear Mark Padmore, whom I consider one of the most talented and sensitive tenors of our time. He is someone who sings "intelligently", as Paul himself put it when we finally met. 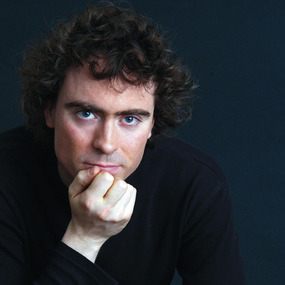 I love Schubert, but I am not really a big fan of Winterreise. I find it too sad. Although it was written for tenors, I also have few recordings by baritones and mezzos. My favorite version used to be the one with Hans Hotter and Michael Raucheisen, that is, until the day I listened to Mark Padmore and Paul Lewis. I was completely transported. Mark was intensely moving, and Paul, especially in Gute Nacht, was delicate and tender, with subtle phrasing and dramatic pauses. The sound of the piano was like an echo, sighing at the sadness of the lyrics. My heart beat in time with his notes, sinking with the cadenza. It was without doubt the best Gute Nacht I had ever heard in my life.

Soon afterwards, I was in London and, as usual, I went to my favorite shop, Harold Moores Records. I was happily browsing through the CDs, chatting all the while with Tim. I asked him about Paul, and Tim, being a Beethoven aficionado, handed me the complete Beethoven Sonatas cycle. "Juliette, this is a must-have. It’s even better then Alfred Brendel!" he declared.

Thanks Tim! Since I bought the cycle, the box has taken up permanent residence on my desk. I never grow tired of listening to it. All the Sonatas are wonderful, but the Pathétique is simply magnificent. The first time I listened to it, my heart almost stopped with the very first chord of the Grave. I held my breath, and waited anxiously for the next one. It was like magic. Time froze and during the few seconds between the first and second notes, my head cleared and my mind awoke. I was then captivated and mesmerised by the succeeding notes.

It is a truly wonderful interpretation that I listen to not only with my mind, but also with my heart and soul.

When I found out that Paul was coming to Hong Kong, I made sure that I would be in town and free for the evening. Beethoven’s Piano Concerto No. 5, the famous, imposing, grand Emperor was performed. During the whole concerto, I almost wished that the orchestra wasn’t there. It wasn’t that the Hong Kong Philharmonic Orchestra was no good. Actually, it was excellent under the baton of Maestro Edo de Waart. I just found that the sound of the orchestra distracted me from concentrating on Paul. Only during the second movement, the Adagio, was I able to get closer to the intimate and intellectual Paul.

For the encore, Paul played Klavierstück by Franz Liszt, a short, simple piece but delivered like a little gem, unique and refined. And then, Schubert’s Allegretto in C Minor, intriguing, inspiring, cerebral – very Paul.

The beauty of Paul’s playing is that you can tell that each note has been examined, analysed and structured to be integrated back into the piece to form a perfect unity. There’s a lot of work involved, not only on the mental side but also on the technical side so that the performance can be delivered with complete control.

After the concert, there was an autograph session. I joined the end of a long queue, determined not only to get my newly acquired Schubert Sonata CD signed, but also to get a chance to talk to my idol. The friends who had accompanied me were curious to see how I was going to approach Paul and secure some extra time with him.

When it is my turn, without thinking, I simply asked Paul if he would give an interview for Interlude. I was absolutely delighted when he said yes, despite the fact he had a sleepless night and was quite tired after a long journey. My friends stayed on with me to see how I would handle the interview, since it would be the first time I had ever interviewed anyone in my life!

Paul was extremely friendly. I was uncomfortable because I had no experience with interviews, and I was taking up his resting time. However, he was gentle, forthcoming and composed.

Through the media, I already knew that Paul would be recording the complete Beethoven Concertos and also the Schubert song cycles. However, I wanted to ask him why he had not recorded Bach, who, for me, is the greatest composer of all time. Being very humble, Paul suggested that he was not ready yet, mainly because he had started playing the piano relatively late in life. I did not dare to impose my own opinion on the matter, but I can say here that I believe there are no such prerequisites for playing Bach, and I know Paul will add a new dimension to Bach’s music the day he decides to play.

Please visit Paul Lewis’ website, and if you have the chance, go to his Midsummer Music festival. He is a truly great artist, one of the very few who can take you on journey of art, music, refinement and intelligence – a simply beautiful journey.