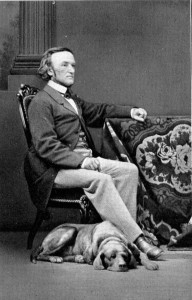 In 1879, the French composer Emmanuel Chabrier requested leave from his job at the French Ministry of the Interior so that he could travel to Munich, which was the only place in the world to hear Wagner’s opera Tristan und Isolde. He was so taken with Wagner that he resigned his position in the Ministry the next year to become a full-time composer. He then became the assistant to the conductor Charles Lamoureux, helping him put on concert performances of Tristan in Paris in 1884 (Act I) and 1885 (Act II).

Chabrier’ Souvenirs de Munich takes the themes of this serious opera of illicit love and betrayal and makes it into a Quadrille. The quadrille was a simple dance for 4 couples in a square in a set of 5 dances: 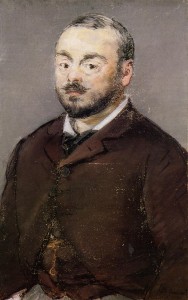 And so Chabrier did the same thing: his Pantalon uses themes from Act I where the sailors greet King Marke. Eté takes its material from Act II using these themes of Ecstasy, Love call, and the Love song. Poule contrasts the shepherd’s joyful tune from Act II with the Liebestod of Act II (listen around 02:45 and 03:09). The Pastourelle takes its inspiration from the themes of Kurwenal’s song and the final Galop uses material from both Act I and Act II: Sailor’s doleful song (Act I), Kurwenal’s aria (Act I), and Longing for Death (Act II).

All of Wagner’s melancholy and longing are gone, subsumed under a brilliant piano parody. Chabrier often improvised these kinds of parodies and it is reported that at a dinner party at Lamoureux’ house, Chabrier’s parody of the Ring caused Hans von Bülow, the conductor of many Wagner’s works, to get completely enraged.

Chabrier wasn’t the only composer to take on Wagner’s pompousness. Gabriel Fauré and André Messager travelled around Europe to see Wagner’s operas. Starting in 1878, they saw Das Rheingold and Die Walküre at Cologne Opera; the complete Ring cycle in both Munich and London; and Die Meistersinger in Munich and then went to Bayreuth, where they saw Die Meistersinger and Parsifal. Their Souvenirs de Bayreuth is subtitled Fantasie en forme de quadrille sur les thèmes favoris de l’Anneau de Nibelung (“Fantasy in the form of a quadrille on favourite themes from Der Ring des Nibelungen“). Fauré and Messager’s four-hand party piece is also in 5 movements, but without names.

I. Starts off with that “Hojotoho” of Brunhilder and her Valkyrie sisters from Die Walküre.
Fauré and Messager: Souvenirs de Bayreuth: I. – (Eric le Sage and Alexandre Tharaud, piano 4-hands)
II. From Das Rheingold, we have the leitmotif of the Tarnhelm.
II. –
III. From Die Walküre, it’s the love song of Siegmund – but done as such as silly skippy melody that when the Valkyries call comes in the middle it’s quite shocking.
III. –
IV. From Die Walküre, it’s a mixture of the magic fire music and Wotan’s music.
IV. –
V. From Götterdämmerung starts with the call of Siegfried and ends with the Rhine maiden’s song as they get their gold back.
V. —
Somehow, the mighty Wagnerian drama of life, love, and death becomes trivialized by the dance rhythms.

These composers all admired Wagner greatly and fully understood how, with his operas, he had changed European music into something greater. At the same time, they could see his tremendous ego operating and could dissect it through their music. The French composer Francis Poulenc, in his biography of Chabrier, described Souvenirs de Munich as “irresistibly funny”, putting Wagner’s principal themes into “false beards and fake moustaches.”