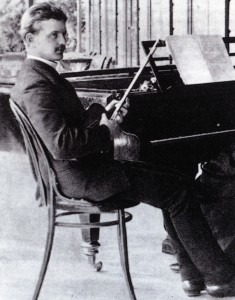 Music can be an all-consuming passion that serves as a daily spiritual and physical exercise. Jean Sibelius (1865-1957) certainly thought that way, as “music grasped me with a power that rapidly relegated all my other interests to the background.” Initially, however, music was also associated with pain as his auntie Julia, who gave him piano lessons on the family upright piano, tended to rap his knuckles whenever he played a wrong note! Not surprisingly, he gave up the piano in favor of the violin in a real hurry! According to Sibelius, he “played the violin practically from morning to night,” and he quickly became an accomplished player. To widen his musical horizon, Sibelius participated in various chamber music activities, and gradually supplied his own compositions for performance.

Jean Sibelius: Piano Trio in D Major, “Korpo,” JS 209
Although Sibelius publically performed a number of eminent violin concertos in Helsinki, he also came to understand that his ambitions to become a concert violinist could not be realized. “My love for the violin lasted quite long and it was a very painful awakening when I had to admit that I had begun my training for the exacting career of a virtuoso too late.” In January 1891 he auditioned unsuccessfully for the Vienna Philharmonic Orchestra, and although he continued to play for the Helsinki Philharmonic Society Orchestra, he gradually turned his attention to composition. Sibelius composed more music for the violin than for any other solo instrument except the piano. Among his early works is the Violin Sonata in F major, completed in the summer of 1889. In a letter to his uncle he writes, “the first movement is fresh and daring as well as gloomy with some brilliant episodes; the second movement is Finnish and melancholy, like an authentic Finnish girl who sings on the A string. The third movement is fresh and spirited as well as romantic, with people in a meadow singing and playing on Midsummer Night. A meteor falls among them, but they continue to play. At the end the mood becomes splendid but gloomy (the meteor) and also playful and happy.”

Jean Sibelius: Violin Sonata in F Major, JS 178
For Jean Sibelius, the tone poem Finlandia decidedly marked the turning point in his compositional career. Inspired by the political climate in Finland at the time of its creation, Finlandia brought Sibelius international recognition, personal fame, and sweeping popularity. By1899, Russia had imposed a strict censorship policy on Finland. In October of that year, Sibelius composed a melodrama to a highly patriotic poem for a fund-raising gala organized by the Finish press. Sibelius extracted six tableaux from his melodrama. Originally titled “Finland Awakes,” Sibelius reworked the composition into an independent symphonic poem in the following year and retitled his rousing patriotic essay Finlandia. For Sibelius, Finlandia was a “relatively insignificant composition,” as it eclipsed his more substantial works. Nevertheless, it was swiftly adopted to become Finland’s second national anthem.

Jean Sibelius: Finlandia, Op. 26
Sibelius was heartily criticized for writing a large number of piano miniatures. Apparently he has told his student Bengt von Törne, “I write piano pieces in my spare moments … as a matter of fact the piano does not interest me because it cannot sing.” Eminent pianists like Glenn Gould disagree, “Sibelius never wrote against the grain of the keyboard. In his piano music everything works, everything sings—but on its own terms. Sibelius was able to make a significant contribution to the far too limited piano repertoire of late Romanticism.” Sibelius’s piano music follows the pattern of his stylistic development, with the set of miniatures Op. 24 perhaps most popular and most frequently played. Composed over a period of several years, Sibelius is primarily concerned with creating a musical synthesis of Central European and Finnish stylistic elements.