Delving into the unknown 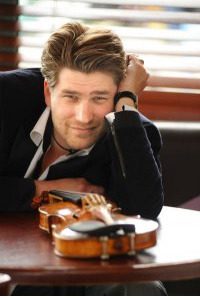 I talk to Nicolas Dautricourt the evening before a performance he’s giving in New York, playing chamber works by Schoenberg, Brahms, and Haydn. Concerts such as these are the staple diet of a touring musician, but nestled in the undergrowth, in amongst the towering oak trees of Mendelssohn and Mozart, lies a lush, teeming world of undiscovered, seldom-played repertoire – and Nicolas’ recently-released CD of Sibelius violin works brings to light these rarer species.

‘I always sought after seldom-played pieces. Some of them, if they’re not played, there are reasons! But with these pieces, I found none.

‘It’s a lot of fine and delicate work. Everything is findable through the internet, so for me at the minute it doesn’t make sense to record a Brahms concerto. I prefer to focus on Sibelius, on Ysaÿe… There, you have no frame of reference and you can create your own world.’

With the potentially huge pool of repertoire available to a concert violinist, it can be hard to find music that people don’t already have a favourite interpretation of. Introducing people to new music (even by composers they may never have heard of) is something this French violinist is passionate about.

‘Last summer I played some Boulez that I snuck into a chamber music programme. We put it in at the very last minute. The audience didn’t know anything about Boulez’s music, but I had a lot of great feedback. They were happy to discover this composer and his language, even though it’s a hard language; I’ve never felt so proud.

‘If people like it, you know you’ve done your job.’

Nicolas is no stranger to success – he was named ADAMI Classical Discovery of the Year, and plays in venues from New York’s Kennedy Center, through London’s Wigmore Hall, to the Ishikawa Ongakudō hall in Japan. He is also playing more and more jazz, and uses jazz’s performance ethic to try and move away from the stuffiness which inhabits a lot of classical concert etiquette.

‘There are rules, of course, there are guidelines, but what is very special to jazz is the relationship to real time. When jazz performers come on stage they don’t know exactly what’s going to happen. That’s extremely valuable to me.

‘And of course this is the precise opposite to how a lot of classical musicians think. You want to secure every detail, and this is not me at all.

‘If we could have the same sort of ‘cool’ attitude in classical music, I think the barriers would suddenly disappear, and it would be way easier to connect worlds with each other.’

These barriers, in Nicolas’ eyes, are created by young performers being ‘slaves’ to their instruments. 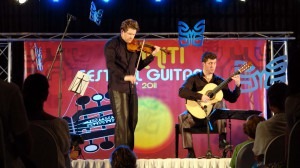 ‘This sort of ‘cult’ of specialisation kind of gets you squeezed and stuck, and it affects your potential of expression. You’re walking on the street, say, and someone says “hey man, you have a violin, play something!”

‘And a classical musician would reply “oh, well, I don’t have a music stand, I didn’t prepare anything, I’m not ready, I’m not in shape…” What?! We should be able to improvise something, anything, that passes through our head, regardless of whether you do it well or not. Just play with heart and spontaneity.’

Indeed, the first piece that Nicolas can remember grabbing his attention as a child was Prokofiev’s first Piano Concerto, which itself is a firestorm of technical virtuosity and youthful brashness. And how about nowadays?

‘I was recently listening to some Sibelius that I didn’t know so well – Finlandia, The Swan of Tuonela, and so on… and when I run I enjoy electro.’ Nicolas is a self-confessed tennis addict, and runs every day (he recently ran a marathon, and is already training for his next). His most recent run included the album Plat du Jour by British techno musician Matthew Herbert, the first track on the album – ‘The Truncated Life of a Modern Industrialised Chicken’ – yet another example of his desire to find something a little more off the beaten track…

Nicolas’ CD can be found at La Dolce Volta