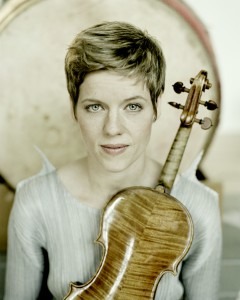 Winner of the 1987 Leopold Mozart Competition and the 1993 Paganini Competition, Isabelle Faust is one of the most prominent young violinists of the day.

Born in Esslingen, Germany, ten miles southeast of Stuttgart, Faust started playing the violin at the age of five, two years after her father started learning as an amateur. Together with her older brother, Faust played in a children’s string quartet on the weekends until fifteen years old.

Faust’s victory at the Leopold Mozart Competition when she was just 15 paved the way for her solo career. She has appeared with some of the world’s finest orchestras, including the Münchner Philharmoniker, Orchestre de Paris, Boston Symphony Orchestra, BBC Symphony Orchestra, and Mahler Chamber Orchestra. She has worked with acclaimed conductors such as Claudio Abbado, Giovanni Antonini, Jiri Belohlavek, Daniel Harding, Heinz Holliger, Marek Janowski, Mariss Jansons, and Sakari Oramo. In 2009 she made her debut with the Berlin Philharmonic. Whilst not neglecting the classical and romantic repertoire, Faust is a noted interpreter of the great twentieth-century works of Feldman, Jolivet, Ligeti, Nono, and Scelsi. She has premiered pieces by such composers as Olivier Messiaen,Werner Egk or Jörg Widmann, and works dedicated to her by the composers Thomas Larcher and Michael Jarrell (2009). 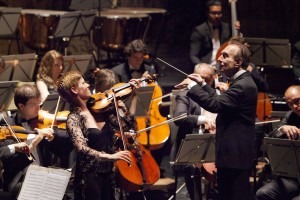 Faust has made several recordings of chamber music for Harmonia Mundi on both modern and period instruments with her partner Alexander Melnikov including the complete Beethoven sonatas. Their CDs have received high recognition worldwide, such as the “Choc de classica”, the “German records Critics’ Award”, the “ECHO Klassik Award” and the Gramophone Award. Her latest solo recording of the Partitas and Sonatas by J. S. Bach was decorated with the “Diapason d’Or Arte” among others.

Faust plays the ‘Sleeping Beauty’ Stradivarius of 1704, kindly loaned to her by the L-Bank Baden Württemberg.

Interview with Faust on her latest album