Artists Interviews
In touch with The Planets
by Janet Horvath April 4th, 2013 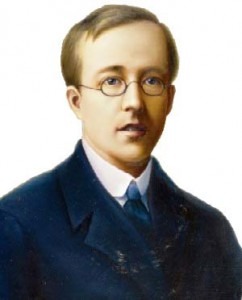 Holst called the piece “a series of mood pictures.” The piece The Planets — a seven movement orchestral suite, is an example of brilliant and imaginative orchestral writing. The term orchestration includes the choice of instruments, the exploitation of each instrument’s possibilities of range, color, and dynamics and the combinations of instruments that might be unique. This contributes to the richness and uniqueness of the sounds you hear. Holst uses some unusual and more rarely used instruments in this piece — the alto flute, bass oboe, organ, celeste, two harps, and several timpani.

I. Mars – The Bringer of War

Notice at the beginning of the piece there is a clicking or percussive sound and it is not coming from the percussion section. That is a string technique called “col legno.” The string players hit the string with the stick of the bow for this sound. Now try to guess the meter. Hint: it’s irregular.)

Which instruments are featured in the theme: the threatening bringers of war? Which section?

Advanced question: which instruments play this rhythm over and over
(Hint: It’s a brass and a percussion instrument)

The rhythm is menacing and mounts in tension. Soon there is an all out fanfare symbolizing war. Listen for the Euphonium solo about a third of the way through seemingly representing the “other side” which is crushed. The decisive unison chords at the end of the movement leave no doubt!

II Venus – The Bringer of Peace

This movement is markedly contrasting. First it is adagio or very slow. Note the very high horn playing virtually alone. It feels lonely. There is another instrument with extensive solos. (Hint: it’s a woodwind instrument)

Listen for the solos, (i.e. one player), in the violin and the cello section. The concertmaster and the principal cello are responsible to play these solos — a requirement of the position of a principal player. Composers frequently utilize the choice of one instrument. Notice also that the writing is very high in pitch and sparsely scored. Perhaps this makes the listener feel more peaceful or pensive. It certainly has an air of calmness. The string writing is lovely. Listen about 14 minutes in for a bell like sound. What instrument is this? (Hint it’s keyboard instrument)

This short movement is marked “vivace” or light and in a fast 6/8 meter. Notice the conductor. What does he/she conduct it in? (i.e. the beat patter?)

Near the beginning of the movement you will hear again the bell -like keyboard instrument. In the middle of the movement the tempo gets faster, The conductor will most likely conduct one beat per bar but the orchestra plays 6 notes per bar. It has a light feel as the musicians play “staccato” notes of very short duration with space before and after them. You will hear the piccolo play with the bell-like keyboard instrument playing in the same range toward the end.

IV Jupiter – The Bringer of Jolity

This movement begins in a fast “allegro” 2/4 meter. Soon it will change to a slow 3/4 with the horns playing the melody loudly. Notice that the orchestra makes an ”accelerando” (to get faster.) It is conducted in one beat to a bar. Later a lovely stately melody occurs in all the strings. It sounds so British! It’s in unison i.e. all the strings are playing the melody together at the same pitch. All the bows are moving as if in a ballet. The musical signs to do this are coordinated, planned and marked in the parts ahead of time by the concertmaster and principal players, often in consultation with the conductor who may have a special phrasing or articulation in mind. Even if the various string sections do not play a particular melody simultaneously, the bowing must be consistent throughout to maintain the right phrasing and mood. An orchestral librarian will mark the bowings into all of the parts. Listen also as Holst adds more percussion including the tambourine and xylophone.

Saturn begins with three flutes. The alto flute plays the lowest notes. The first 26 bars consist of chords in a syncopated rhythm (irregular rhythm) in the flute and harps. A beautiful low double bass melody accompanies the flutes — quite unusual scoring. Very near the beginning after the cellos play their long note you’ll hear the bass oboe. (29 min) This instrument is very unusual. It sounds a little like an English horn. Also notice that the cellos and basses are plucking their strings. This is called pizzicato. Notice the beautiful and stately melody played by three players of the brass section. Which instrument is this? (Hint: they sound different than they usually do)

You’ll hear the alto flute at 31 min, and long suspended bells at about 32 minutes. This movement has a march-like feel but more labored as if older people are marching.

Near the end, when the solo basses return, you will hear them accompanied by a very interesting sound. They are harp harmonics. All strings can produce harmonics. This is the effect produced by lightly touching the string. The result is the sounding of the fundamental pitch with no overtones and hence it sounds a little like a whistle sound. The movement ends without resolution via long notes suspended in the violins. Holst attains a certain calm, or perhaps acceptance?

This movement utilizes the interesting meter 6/4. It is conducted in two (six quarter notes per bar, two beats of three quarter notes each similar to the 6/8 rhythm.) The bassoons introduce the rhythm. It begins with a huge trumpet/trombone part with a staccato, creeping bassoon/xylophone/tuba melody, which creates the sense of a crafty sorcerer. Listen also for the two timpani players who play five drums each. There’s a huge chordal climax, which fools us into thinking the movement, and even the piece is ending. But no! Suddenly Holst take us by surprise. We hear long held string notes and harp interjections as Holst ends the movement quite abruptly.

Here’s another chance to hear the alto flute accompanied by or very fast repeated notes in the harp called tremolo. The movement begins with the principal flute, the alto flute and the harp. This movement sounds Debussy-like and impressionistic with vague washes of sound and the mysterious alternation of two unrelated chords E minor and G# minor. Here’s the same irregular meter as the first movement but in this case it is slow,

Once again Holst has the higher pitches dominate. At about 45 minutes we get a chance to hear the whole clarinet section—the two oboes, bass oboe, and English horn. Soon thereafter, suddenly a women’s chorus enters seemingly from nowhere. Where has the composer chosen to place them?

Note that they sing wordlessly. What mood do you think Holst is trying to convey by doing this?

This movement is eerie and distant — very delicately scored and performed “pianissimo” (extremely quietly.) It leaves the listener unsettled — not the bombastic ending one might have expected after the flashy and brilliant opening we heard at the beginning of the piece.

Although this piece is a very popular orchestral work and frequently performed, Holst didn’t especially care for it. There’s no accounting for taste! Ravel disliked his Bolero too!

Holst The Planets with Ormandy and Philadelphia.

3. Trumpet and Snare drum and then Timpani

9. Hidden: up in balcony or backstage.

10. This question is deliberately subjective. It can affect each of us differently and the mood it invokes in you may be: a sense of peace, mystery, eternity, calm, restfulness or feeling unsettled or pensive.