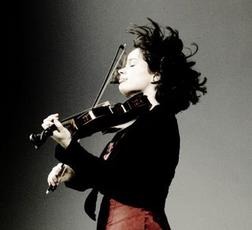 Violinist Patricia Kopatchinskaya was born in Moldova in 1977. In some sense she is the epitome of the modern high-profile touring musician, with concerts in Linz, Vienna, London, Brussels and Tokyo alone in the next few months performing concerti with the world’s leading orchestras and conductors. More than that, her disc of Hungarian violin concerti has just won the prestigious Gramophone Record of the Year award.

Yet her range of musical activities and cited influences suggests a musician uncomfortable with the routine of major concerto performances and more concerned with simply making music. This viewpoint may well stem from her childhood. Her parents were folk musicians, her father Victor playing the cimbalom and mother Emilia a violinist. Kopatchinskaya says that ‘they often took me with them on their tours throughout the whole Soviet Union. Their ensemble included dancers and singers as well, and I was always impressed by their colourful costumes and performances’, adding that ‘it was the most natural thing for me to do the same as what they did.’

It would be simplistic perhaps to link this experience to her vivid performances. But Kopatchinskaya’s unpretentious approach to music may well find its roots in her early life, both musical and otherwise, and also to the landscape of Eastern Europe. She cites her influences as ‘the sounds of the rain and wind, (in German ‘das rauschen der felder’), the rubato parlando of the orthodox priest, the murmuring crowd.’ Her seeming ability to make vivid the nebulous both verbally and musically is perhaps central to her appeal as an artist.

Kopatchinskaya’s self-described most memorable musical experiences to date are not defined by particular performances, periods of study or competition successes. Rather, she cites ‘any time I find like-minded musical partners’. This might seem to point to collaborations with orchestras and conductors, but in fact Kopatchinskaya makes time in her solo schedule to make music in a smaller, but no less exciting or innovative scale. Combining core string quartet repertoire and lesser-known contemporary music, along with influences from the principles of improvisation and folk music, quartet-lab comprises four international soloists, Kopatchinskaja and violinst Pekka Kuusisto, violist Lilli Maijala and cellist Pieter Wispelwey. With performances already across Europe, the group represents one of the most exciting currents in the string quartet world. 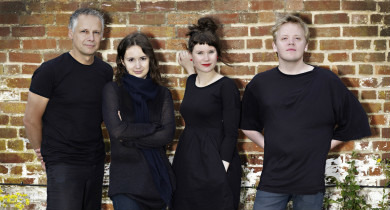 As already suggested, Kopatchinskaya maintains a remarkably busy schedule. When I asked what she does outside music, she gave a witty reply – ‘I despair’. This is surely tongue-in-cheek; but the impression of this violinist that is gaining hold with audiences and within the world of classical music is of someone who brings a rare combination of seriousness, honesty and joy to music making despite the pressures of her lifestyle. Indeed, when asked about her professional hopes for the future, Kopatchinskaya does not suggest high-profile venues or new pieces, but that she hopes ‘not to become petrified by the concert routine, and always remain true to my musical ideals.’

She may despair, but I am sure many of us are thrilled at the prospect of listening to Ms Kopatchinskaya for many years to come.

Patricia Kopatchinskya is the winner of the 2013 Gramophone Disc of the Year with her recent recording of concertos by Bartók, Eötvös and Ligeti on the Naïve label. Ms Kopatchinskaya’s new album of the Stravinsky and Prokofiev Second violin concerti with the London Philharmonic Orchestra and Vladimir Jurowksi was released this October.