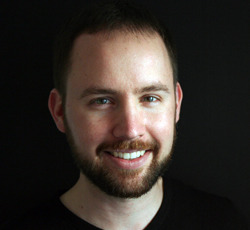 “I won’t attempt to pronounce that,” I said.

“Chuchichäschtli,” Charles Halka, US-based composer, pianist, and one of six composer fellows at the upcoming Intimacy of Creativity 2013, repeated with a laugh. “It’s a Swiss-German word that actually means kitchen cabinet.”

Chuchichäschtli was not Charles’ furniture choice for his kitchen. On the contrary, it was the name of a work for bass clarinet and piano that he had recently written for American clarinetist Benjamin Mitchell, and a work that he stated was one of the best ones he’s composed so far due to the amount of conversation that has gone into it.

“I think my best pieces have been those that have been shaped by the performer,” mused Charles as he sat down with Interlude to talk about music collaboration, connecting with his Lithuanian roots, and his excitement over revising and performing his work Round and Round at the IC in April.

Do you think it’s important to be an active performer nowadays in order to get your music out there?

If you were a really good performer, I’d say. I’ve played my own pieces on a couple of occasions, but [the Intimacy of Creativity] will be the first time in a long time and I really look forward to it because I do think it’s important, and I think that the audience connects to the music on a different level when they actually see the composer performing.

Do you think it is important to know how to play an instrument in order to be a good composer?

You’d assume that the answer would be a yes, otherwise how could you understand the demands on a performer? But then again I think there are some people who don’t play instruments whose music… doesn’t have this concern for practicality at some level. Sometimes they are able to get some more interesting results, even if they may not be feasible when it gets down to actually performing them, but at least they don’t have that barrier when they’re composing new pieces.

You wrote an opera as a Fulbright scholar in Lithuania. Can you tell us more about it?

My mother was Lithuanian, and I had the idea to go to Lithuania to write an opera about my grandfather, and my family’s experience as displaced persons just after WWII. The music was based mostly on songs that my grandfather used to sing. We recorded him singing a lot of these songs, folk songs and popular tunes, just before he passed away. The project was as much a personal project as it was a purely compositional project. I learned a lot about my grandfather and about where his songs came from.

The opera is a string of different scenes that are loosely connected in the same general theme, containing a lot of anecdotal stories that my grandfather told and passed down as displaced persons.

When the opera was premiered in 2010, the former Lithuanian president, who was also a displaced person himself, was also there.

When was the last time you worked with a performer in a composition?

The performer who commissioned the piece, Chuchichäschtli, is an American clarinetist living in Switzerland. I met him in my undergraduate, and I recently reconnected with him during my doctoral program. He was about to leave for Switzerland and he told me what pieces he liked and the kind of things he could do well as a performer. I listened to…works that he loved; I wrote down the things he said he could do really well, and I begin to write a piece based on those.

Along the way I sent him questions about range, about technique… so there was this constant back and forth scenario. There was constant revision during the first composing process.

It’s best when you know the person you’re writing for, and you’re in contact with them. And I think my best pieces have been those that have been shaped by the performer as well.

What was the inspiration behind your composition Round and Round?

It’s an exciting piece… when I write intuitively, it tends to be very high energy, lots of syncopation, lots of romantic gestures, and I think this piece has all of those. I’m also proud of the circumstances that brought about the piece. We were searching for music for a concert to celebrate the centennial [of Rice University] and I offered to write a piece because we were two pianists, a violinist and a celloist, and there isn’t anything written for that combination.

Are you nervous about having your work criticized?

No, I know the flaws of all my pieces, I’m hoping that the flaws they will point out, or things they say could be better are things I’m already thinking about. But I’m also going to welcome things that I don’t see. [It’s] actually more helpful for someone to let me know something that doesn’t work, or something that I might not have noticed about the piece before. That’s really crucial to someone’s understanding, or someone’s appreciation of [my music].

What do you think of the process of revising a piece? Are changes ever going to be permanent?

The process of revising a piece [is] something that we don’t tend to do a lot as composers. Once we’ve written it it’s premiered and we won’t change. We would change a few notes, or correct a few mistakes after that first performance, but most of the time serious revision doesn’t take place. In the past people revised their compositions more often, even someone like Stravinsky revised his pieces all the time.

I can say that on my part at least, I have a stack of scores that I have back from performers who have written notes on the score, ready to be incorporated into the score, for revision, I’m just finding the right time to do this. I suppose if I were being published, I would then go back and make serious changes to the piece. I feel that at least on my part, as long as my piece exists in what it doesn’t have to be final form, there’s no real incentive to make the final version, because I know I can always make the final version whenever I want to.

What goals do you have for the future?

To find a group of people who connect with my music, even if it’s a small audience or a small group of composers. I think I found a few already who believe in me as a composer, and who I believe in as performers. I think that personal relationship is very important. That’s what I hope for in the future. Really strong creative relationships are the most rewarding thing about being a composer.