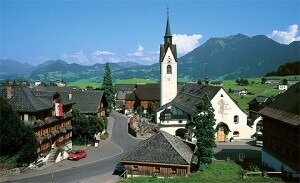 In the musical world, Moritz von Schwindt is primarily remembered for his famous drawing entitled “Schubertiade.” The term “Schubertiade” was actually coined by friends of Franz Schubert, and described private and informal musical gathering in the composer’s apartment. In addition to the composer’s participation, these meetings often featured poetry readings, dancing, and other sociable pastimes, with attendees numbering from a handful to over one hundred. Schwindt, who grew up in Vienna, was part of the Schubert circle until the composer’s death in 1828, and subsequently moved to Munich. In 1868, with Schubert’s popularity on the rise, he fashioned his famous drawing from memory. In the center of the drawing, we find Franz Schubert at the grand piano. Featured guests include Joseph Ritter von Spaun, an Austrian nobleman and Imperial and Royal Councilor, the composers Johann Michael Vogl and Franz Paul Lachner, the painters Leopold Kupelwieser and Wilhelm August Rieder, who painted a number of famous Schubert portraits. Also present are the dramatists Eduard von Bauernfeld and Franz Grillparzer, the poet, librettist, lithographer and actor Franz von Schober, and Moritz von Schwindt himself. An attentive company of men and women, comfortably seated on plush Biedermeier furnishings, surrounds this central core of famous personalities. The woman in the painting watching over the entire gathering is the Countess Karoline Esterházy, Franz Schubert’s unrequited love.

Although Schwindt’s drawing clearly depicts an idealized scene, it nevertheless becomes clear that Schubertiade gatherings were part of the intellectual salon rather than family affairs. After all, the cozy home of family music making with a grand piano centered in the living room, was a cultural construct of the Austrian State. Schubertiade meetings, on the other hand, had distinct intellectual, erotic and often dangerous political undercurrents. In the aftermath of the French Revolution and the Napoleonic Wars, Austrian police was highly suspicious of any gathering of students, youth, intellectuals and artists. Following a Schubertiade gathering, Schubert and four of his friends were arrested on suspicion of revolutionary activities by the Austrian secret police. Johann Senn, a talented poet and writer was imprisoned for fourteen months without charges being brought against him, and subsequently permanently exiled from Vienna. Schubert and his other friends were severely reprimanded for “inveighing against officials with insulting and opprobrious language.” Schubert never saw Senn again, yet continued to set his poems to music, most famously among them “Selige Welt” (Blessed World) and “Schwanengesang” (Swan Song). 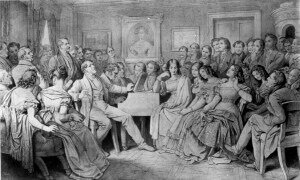 While many Schubertiade meetings originally included the composer’s participation and took place in Vienna, the increased popularity of the event, which slowly lost it’s political associations, saw it quickly spread throughout central Europe. After all, the bourgeois world of the parlor became a valued cultural phenomenon throughout the 19th century. In 1976, the internationally acclaimed baritone Hermann Prey was looking to establish an annual festival dedicated to the music of Franz Schubert as far away from Vienna as possible. He settled on the small town of Hohenems, picturesquely located in Western Austria, and not surprisingly christened the festival “Schubertiade.” Since then, this summer festival has become one of the most distinguished and important musical events in the calendar, and presents 80 concerts in various venues that attract roughly 40,000 visitors a year. Focusing to maintain an atmosphere of intimacy, the Schubertiade invites the most prominent and established international performers, yet also endeavors to introduce promising young musicians. And of course, the chamber and lieder menu has expanded beyond Schubert. If you happen to find yourself in Hohenems or Schwarzenberg this summer, make sure you enjoy the gorgeous mountain surroundings and the splendid music of Franz Schubert. One thing for sure, you won’t be arrested for attending!