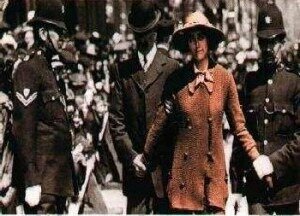 We all remember that Johann Sebastian Bach was jailed for overstaying his holiday, and that Beethoven, mistaken for a homeless vagrant, spent a couple of days in the slammer as well. Michael Tippet was arrested for conscientiously objecting to WW2, and Eric Satie spent a week in jail for his role in causing a riot after the premiere of Parade. Igor Stravinsky was arrested for inserting a controversial major seventh chord during a performance of the American national anthem, and Franz Schubert simply hung out with the wrong crowd. Henry Cowell, in turn, was sentenced to 15 years in San Quentin State Prison on moral charges, but my favorite composer behind bars has to be Ethel Smyth (1858-1944).

From an early age, Smyth devoted her life to music and against the wishes of her father, studied at the Leipzig Conservatory. She took counterpoint with Carl Reinecke, theory with Salomon Jadassohn and piano with Joseph Maas. In Leipzig, she met Dvořák, Grieg and Tchaikovsky, and later through her private teacher Heinrich von Herzogenberg, became acquainted with Clara Schumann and Johannes Brahms. Smyth made her professional debut as a composer on 26 January 1884, with her String Quintet in E major, Op. 1, which was performed at the Leipzig Gewandhaus. The work failed to make an impression with the critics, but resonated with Tchaikovsky, who wrote in his memoirs: “Miss Smyth is one of the comparatively few women composers who may be seriously reckoned among the workers in this sphere of music. She has composed several interesting works, which gave promise in the future of a serious and talented career.” By 1910, all of her major works had been performed, and she was awarded an honorary Doctor of Music by the University of Durham. In the end, her published works include six operas, a concert mass, a double concerto, a choral symphony, songs with piano and orchestral accompaniment, organ pieces and chamber music. “I feel I must fight for my music,” she said, “because I want women to turn their minds to big and difficult jobs; not just to go on hugging the shore, afraid to put out to sea.” 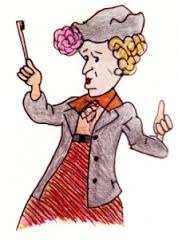 Smyth stopped her musical activities for two years in order to join the “Women’s Social and Political Union,” the militant branch of the suffrage movement in 1910. She participated in demonstrations, made speeches, wrote articles for suffragette publications, and provided shelter for the charismatic leader Emmeline Pankhurst. Her most important contribution was the March of the Women, a song that was quickly adopted as the official anthem of the suffrage movement. However, Smyth was not just an ideological figurehead; she was certainly not afraid to get her hands dirty. When Pankhurst asked for volunteers to break windows of politician’s houses who opposed votes for women, Smyth joined 109 members who responded to the call. She selected the window of the Colonial Secretary “Lulu” Harcourt, who had publicly roused her anger by stating that he might agree to vote for women if all women were as well behaved and intelligent as his wife. Although a constable had been dispatched to guard the Harcourt residence, Smyth’s stone found its mark. She was at once arrested and sentenced to two months imprisonment. Confined at Holloway Prison, Sir Thomas Beecham went to visit Smyth several times, and left an account of one of his visits. “When I arrived, the warden of the prison was bubbling with laughter. He said, “Come into the quadrangle.” There were a dozen ladies, marching up and down, singing hard. He pointed up to the window where Ethel appeared; she was leaning out, conducting with a toothbrush, also with immense vigor, and joining in the chorus of her song March of the Women.” In addition, Smyth wrote two other works for the suffragist cause, Laggard Dawn and 1910. While Smyth was quickly recognized for her role in giving women the right to vote and to stand for electoral office, her recognition as a composer lagged far behind. She once wrote, “As regards changes given, may I say with all the emphasis at my command, that but for possessing three things that have nothing to do with musical genius: (1) an iron constitution, (2) a fair share of fighting spirit, and (3), most important of all, a small but independent income, loneliness and discouragement would have vanquished me years ago.”

Ethel Smyth: March of the Women