Artists Behind the scenes
In Touch with Andrea Fessler – PPHK, my fourth baby
by Jenny Lee November 14th, 2011 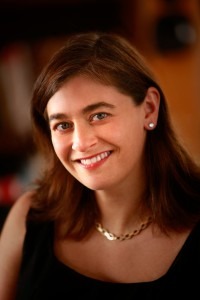 When Andrea Fessler speaks about music, her big round eyes sparkle. Even while working as a lawyer, she would rather sacrifice her sleep and work till 3 in the morning than not attend concerts. A classmate of Barack Obama at the Harvard Law School, she decided to abandon law for music and founded Premiere Performances Hong Kong in 2007. PPHK presents recitals by young international stars as well as a chamber music festival.

I had the idea of starting PPHK in 2006, when it became clear that we were staying in Hong Kong for the long term. A couple of concerts that I went to in Hong Kong triggered my memory of an organization in my hometown called the Vancouver Recital Society, which started in 1980. It focuses exclusively on solo recitals and chamber music. The VRS totally changed the cultural landscape of Vancouver. I kept thinking that somebody should start a VRS in Hong Kong as chamber music was really under-represented in Hong Kong. Over the course of the summer of 2006, it occurred to me that I should be the one to do it!

2) What are the happiest and the most challenging moments in PPHK?

The happiest moments definitely come from hearing the applause and appreciation of the audience at a PPHK concert. I strive to make sure that every PPHK concert is a memorable musical experience. The challenging moments are too numerous to mention. Every week something happens that makes me want to hit my head against a wall. But getting great audience feedback makes it all worthwhile.

3) Could you tell us about the coming chamber music festival?

This is the third year of the Hong Kong International Chamber Music Festival. Like the previous years, it features a diverse group of exceptionally talented musicians who are coming together in Hong Kong. This year’s theme is “Experience the Passion” and offers a broad introduction to chamber music — featuring staples of the chamber music repertoire as well as unusual pieces not played in Hong Kong before. This year, there will be seven free chamber music concerts held at different venues, including the Dr. Sun Yat Sen Museum as well as the Rotunda @ Exchange Square. We will also be having free Prelude concerts at 19:00 in City Hall Theatre before the main concerts that will be free for the public and will feature APA students and young Chinese musicians playing with members of the Hong Kong Philharmonic Orchestra. We will also be conducting special workshops for local youth organized by the Hong Kong Association of Youth Development, and master-classes in collaboration with various music educational organizations including the APA, the Lin Yao Ji Music Foundation of China, the HK Harp Services and the HK Flute Academy.

4) How is it different from the previous years?

This year’s festival differs from the previous two festivals in three major ways:

i) The Artistic Director this year is world renowned violinist Lin Cho-Liang . It is a great privilege for me, as well as for Hong Kong, to have someone like Lin Cho-Liang be at the helm of the Hong Kong International Chamber Music Festival.

ii) The Festival will take place this year from January 11 – 19th, 2012. By moving the Festival from the summer to the winter, and to a quieter time in the Hong Kong arts calendar, I am hoping that the Festival will attract more attention and larger audiences.

iii) The Festival has doubled in size and scope from previous years. We have activities over 10 days, and there will be 25 artists participating in the Festival, from Hong Kong, mainland China and from overseas.

5) What is your future plan for PPHK?

In addition to continuing to grow the Hong Kong International Chamber Music Festival and the Premiere Performances Presents: Recital Series, we are planning to launch a Children’s Series in 2012. This will be a series of solo recitals and chamber music concerts, specially designed for young audiences. We may bring in international artists known for their children’s outreach performances, or engage local musicians to perform specially tailored repertoire. I am very excited that Haylie Ecker, former first violinist of the Bond, the best-selling string quartet of all time, will be the Artistic Director of the Children’s Series. This should be launching in the fall of 2012.

6) As a mother of three, how do you find a balance between your ‘four’ babies?

Good question! Does one ever really find a balance? It helps to be in charge of my own schedule. If I need to go to one of my daughters’ school activities or take them to a medical appointment, I can simply build it into my schedule. I do feel guilty that I spend too much time on PPHK and not enough time with my children, but I also think it is important to act as a role model for them. Not only does my work keep me engaged and happy, but I also think that I am doing something important for Hong Kong. Fortunately, they LOVE going to concerts and listening to the musicians practice.