Artists Behind the scenes
In Australia with the Clare College Choir
by William Cole October 8th, 2012 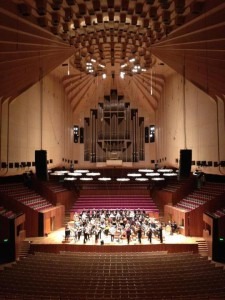 Choir and the ACO in the Sydney Opera House

There is a greater than usual sense of wonder and joy in beholding the Sydney Opera House when you know that you will soon give two performances of Beethoven’s 9th Symphony inside its famous shell. Cambridge is of course not short of wonderful architecture, but our first sight of this extraordinary building, walking to the harbour from our uptown hostel in search of breakfast after our long journey, was enough to blow away the cobwebs from any long haul flight. The first day of our three-week tour of Australia held no commitments apart from to explore the town, and so as we traipsed around Sydney, dizzy with jetlag, we caught glimpses of the Opera House again and again from different angles. The building is of course impressive. But unlike many such buildings (and this is perhaps the key to its iconic status) it is also wonderfully welcoming, seeming to invite you inside and, in a sense (especially if you are approaching the harbour by sea), inviting you into the country itself.

So we felt welcome immediately, a reassuring feeling when part of a project so different from what we are used to as Cambridge Choral Scholars. We had been invited to perform Beethoven’s 9th Symphony on a national tour with the Australian Chamber Orchestra, one of the world’s most exciting ensembles with whom our Director of Music, Graham Ross, has worked extensively in the past. In Cambridge, we sing often familiar repertoire on limited rehearsal time, sometimes to a relatively small sized congregation. Yet here we were to perform Beethoven 9 no fewer than eleven times, from memory, in high-profile concerts covered by national press and publicity, in venues across a whole continent, in some of the largest concert halls on the earth (the Opera house seats 2500, Melbourne’s Hamer Hall 2700) to a combined audience of over twenty thousand people! It wasn’t all work, however – there were patches of sightseeing, with trips to Sydney Zoo and the Blue Mountains, for instance. But apart from that, we essentially subscribed to a touring lifestyle. The distances between cities meant that we spent plenty of time in airports – though we were in Sydney for ten nights or so, we enjoyed one-night trips to Canberra, Brisbane, Melbourne, Adelaide and Perth, billeted with members of the local communities. 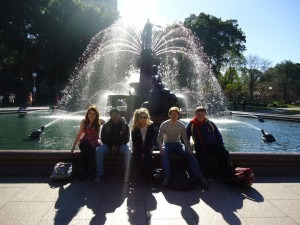 Some singers in Hyde Park, Sydney

Needless to say, we had a wonderful time. There was wonderful music, splendid food, and great (if surprising) explorations of Sydney nightlife. What kept everything fresh throughout the repeated performances, though, was the music we made with the Australian Chamber Orchestra and their Artistic Director, Richard Tognetti. The ACO normally consists of just seventeen core string players. For this, the culmination of their Beethoven cycle, they numbered over three times that. With so many guest players, it was remarkable how quickly the orchestra gelled, though for those in the know it was no surprise at all. The ACO performs without a conductor – though Tognetti is in charge, the rehearsal process is explicitly non-dictatorial, with the focus on careful listening and exchange of ideas. The difference is visible as well as audible. The string players, especially the principals, are in almost constant eye contact, with an almost paradoxical result – a wonderfully relaxed and communal musical atmosphere, but with extraordinary focus and intensity.

Tognetti did, thankfully, consent to conduct the final movement of the Beethoven – with its many changes of speed and musical direction, even a conducted performance is tricky. But rather than indicating every entry, word and slightest nuance to the choir, he let us get on with it, just as likely to be looking at the players in front of him as at us during our crucial entries. This attitude, far from causing problems, forced us to ever greater self-sufficiency, so that by our first performance we were singing absolutely as a unit. The considerable rehearsal time in Sydney before we got on the road meant that there was very little rehearsal at each venue, just a short sing to get used to a variety of different acoustics. This did not mean, though, that we simply gave the same performance each night. One of the great joys of the project was Tognetti’s ability to keep each one of the eleven performances fresh, with new insights each time – though you had to be totally on the ball to be aware of the changes each night to details of tempo and articulation. 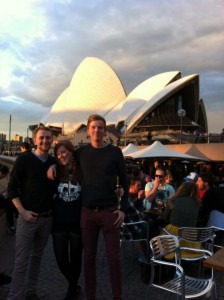 The other great joy was simply listening to the ACO perform the work’s first three movements. For the first nine performances we came on stage after the second movement and sat behind the orchestra during the sublime third. For the last two, though, we sat on stage for the whole piece. The dimensions of the project were of course very different to what we are used to in chapel life, but the greatest difference, the main factor, was the work itself. Beethoven 9 requires not only great stamina and lung capacity – it calls for a totally different way of singing. You almost have to abandon traditional notions of ‘choral’ singing. The choir in this work is not a choir in the traditional sense, but rather a collective, a group of individuals singing together to express a universal sentiment of brotherhood. Parts of the choral writing require a blended, balanced sound, but in this work there are substantial passages where the individuals of the choir need to contribute their own, characteristic sound in the powerfully symbolic act of singing together.

With the ACO and Richard Tognetti, inspired by their collective attitude to making music, I hope that we got at least close to the sound that Beethoven imagined. We of course cannot take that raw, visceral sound back into our own chapel. I’m sure, though, that this experience, both of the work and of our fellow performers, will inspire us long into the future, and I for one can’t wait to get back to Clare College Chapel shortly to resume our daily round of services.