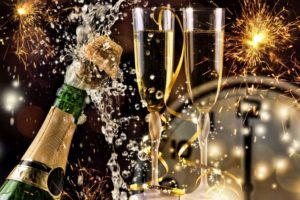 Celebrations for the 2020 New Year are already shifting into high gear, and a good many of us will be generously partaking in various delicious alcoholic refreshments. Around this time of year it is rather all too easy to get overly refreshed, which means that you’ll wake up with the classic symptoms of a hangover. Fatigue and weakness, dry mouth, head and muscle pain, nausea, vomiting, dizziness, shakiness—I think you know what I am talking about. 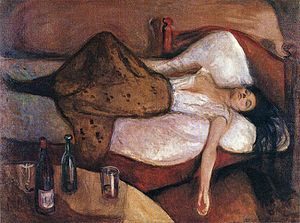 The Day After by Edvard Munch

But here is the good news. A number of scientific studies have been conducted and found that listening to music can offer some significant pain relief. It can sooth chronic pain and postsurgical trauma, and even help with migraines and tension headaches. An eminent researcher wrote, “I would think of a hangover as similar to migraines in the sense that you don’t want anything too sharp, too loud. But if it can distract you, it theoretically is going to offer you some relief.” A 2013 study out of the University of Missouri suggests that upbeat, cheerful music of composers like Aaron Copland is more effective at improving mood than somber, dissonant music of composers like Igor Stravinsky. 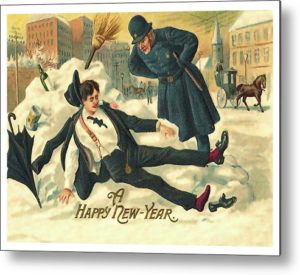 As you might rightfully expect, not all music genres have healing properties. According to experts, better to avoid noise rock and hip-hop, and make sure the volume is not too loud. Music, according to some studies, has pain-killing properties. One study conducted at the University of Edinburgh in 2011 found that “listening to music can reduce the need for painkillers after surgeries, because it soothes patients as well as actually reduces sensations.” It has even been suggested that music might be an anti-inflammatory! Complementary research has also shown that music helps to reduce blood pressure, pain-related distress, nausea, and vomiting. And the best thing is that you don’t have to be particularly musically gifted to enjoy the therapeutic properties of music. Since hangovers do not only come with pain but with a general sense of misery, lethargy and nausea, listening to one’s favorite music can improve mood, reduce stress and lower anxiety, which in turn lowers pain. I am very happy to follow this particular line of research, because it allows me to listen to my personal favorites. 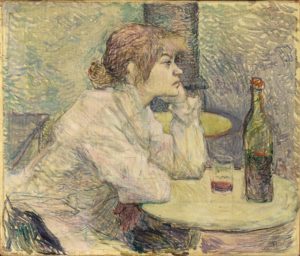 The Hangover by Henri de Toulouse-Lautrec

The causes and mechanisms of hangover are still poorly understood, but the medical term for the condition is “veisalgia.” This term has Norwegian and Greek roots, and basically translated into “the pain and uneasiness following debaucher.” Hangovers are basically mini alcohol withdrawals, as they affect the neurotransmitters for chemicals in your brain. As alcohol is metabolized in your body it oxidizes into a substance called acetaldehyde, which is a seriously toxic metabolite more potent than alcohol itself. Your liver is capable of dealing with a certain amount of acetaldehyde, but when its healing store of glutathione is exhausted, your body gets into trouble. During hangover the body produces an excess of pro-inflammatory cytokines, proteins that help stimulate the immune system but that also produce some of a hangover’s more pernicious cognitive effects, such as memory impairment and mood changes. And here music can help once more, as it has been shown that a powerful musical listening experience can actually relax the body’s production of cytokines. At the end of the day, it seems that a prescription for music hangover relief takes one or two paths. Either soothing the patient back to sleep or stimulating him/her back to consciousness. 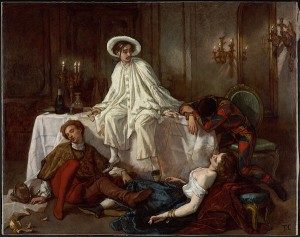 The Supper after the Masked Ball by Thomas Couture

The American writer and critic Dorothy Parker compared a hangover to “the wrath of grapes,” and P.G. Wodehouse apparently knew six varieties of hangover, “the Broken Compass, the Sewing Machine, the Comet, the Atomic, the Cement Mixer and, most dreaded of all, the Gremlin Boogie.” The writer Kingsley Amis warned against focusing exclusively on the physical manifestations of the hangover, suggesting “Psychological, emotional, moral and spiritual aspects should not be neglected.” He also suggests that performing the sexual act “as vigorously as you can” will ease your hangover. However, he appends the warning that you should abstain “if your companion upon waking up is somebody you should not be in bed with.” The forever-inebriated Ernest Hemingway suggested that the best hangover cure is to never stop drinking. He advocated mixing absinthe and champagne in a glass, and drinking three to five of these concoctions slowly. As you can readily tell, there must be millions of home remedies for hangover. However, it seems, that all you really have to do is listen to your favorite music. Happy 2020.