My first concert experience in 2019 began in Hangzhou, the provincial capital of Zhejiang province. There, at the crescent-shaped Hangzhou Grand Theatre by the Qiantang River, I celebrated the New Year’s Eve bells on December 31st, while attending the theatre’s overnight concert series, which included performances by a Chinese orchestra and a jazz band. In the theatre’s market, boys and girls in costumes modelled after Han dynasty clothing queued for a photo shoot in front of a wall in the modestly heated lobby, shivering in the freezing temperature. The tea ritual was practised and calligraphy was distributed to the eager audience during intermission.

Live music has always been an indispensable ingredient of modern life. For me, music comes with a sense of both enjoyment and commitment. In the past year, I have listened to over 120 concerts, most of them taking place in Beijing and, in May, in Nanning where I attended two major contemporary music festivals. More concerts were heard in Europe during my 75-day journey attending summer festivals. Some of the concerts were so inspiring that they deserved a larger audience. Or I mean readership. Hence I came up with the idea to complie a list of the most impressive performances I attended in the past year. No critic can go to everything and my nominations are inevitably arbitrary. Nevertheless, I feel compelled to share those uplifting moments and hope that their diversity casts light on the creativity and originality of music making in the Chinese-speaking territories. 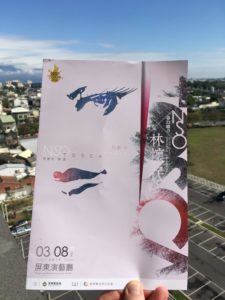 March 8
Puccini’s Tosca. This was a revival of the semi-staged production directed by Lin Hwai-min (林懷民), which was presented at Pingtung Performing Arts Center of Taiwan, performed by the National Symphony Orchestra (NSO) (which outside of Taiwan is known as the Taiwan Philharmonic) conducted by Yao-Yu Wu (吳曜宇).

Renowned master choreographer and director Lin Hwai-Min is best known for founding and spearheading Cloud Gate Dance Theatre of Taiwan. Almost twenty years ago, he directed Tosca for the NSO. The same production was revived, updated, and performed in a semi-staged version in Pingtung City, Taiwan. In the dance legend’s take on a love and hate story that ends up with a jump to death, he used the traditional Peking opera staging of two chairs and one table. The highly symbolic and minimalist interpretation was brought to life by a brilliant cast led by soprano Ling-Hui Lin in the title role. 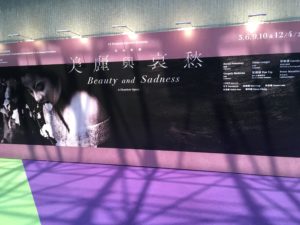 Based on the last published work of Yasunari Kawabata and adapted by David Pountney, Beauty and Sadness is a work with no shortage of feminine beauty or feminist ideas. The main character is played by a mute actor and the only male voice is represented by a counter tenor, highlighted by the virtuoso performance of Japanese drumming led by taiko master Yutaka Imaizumi. 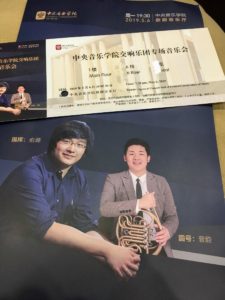 May 6
A concert of the Central Conservatory of Music (CCOM) Orchestra conducted by Lu Yu (俞潞) of music by Richard Strauss, Glière, and Beethoven, with horn player Yun Zeng (曾韻) in Glière’s Horn Concerto.

The CCOM Orchestra is a professional orchestra consisting of career musicians that performs at corporate events and concerts. The concert was the CCOM Orchestra debut of Yu, finalist of the 2013 Nestlé Salzburg Festival Young Conductors Award. However, it was Zeng who stole the show. Two months after this concert, he was awarded the gold medal in the brass category at the XVI International Tchaikovsky Competition, thus becoming the first Chinese instrumental gold medalist in this prestigious competition. 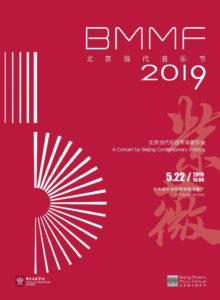 May 22
Concert by the Beijing Contemporary Soloists in the Beijing Modern Music Festival, with music by Wuping Mo and others at the CCOM Recital Hall.

The Beijing Contemporary Soloists was founded in late 2018 by composer Wenchen Qin (秦文琛) who serves as its music director. The ensemble’s debut appearance at the Beijing Modern Music Festival opened with the rarely performed Village Rites by Wuping Mo (莫五平), whose international career was cut short by his premature death in 1993 at 36. Performing in the ensemble was Mo’s son Mo Mo, a cellist. 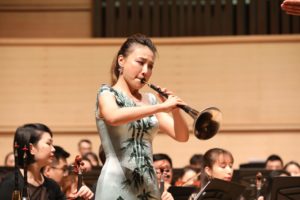 Every year in May, the China-ASEAN Music Festival, hosted by the Guangxi Arts University, keeps listeners in awe with its wide range of programmes, carefully selected premieres, ethnic ensembles, and star soloists, all evident in its opening concert. Suona player Qianyuan Zhang was incredible in Qin’s suona concerto Calling for Phoenix, an eighteen-minute reinterpretation of the classic suona tune that takes the suona playing technique to the extreme. 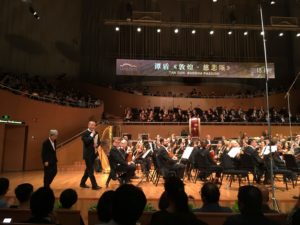 A master of story-telling and an unbashful exploiter of audience psychology, Tan redefined the concept of the passion and its western association with the Bible and connected it with Buddhism. Empowered by a superb quartet of singers, especially the soprano Sen Guo, Buddha Passion is actually an opera in the form of a cantata. 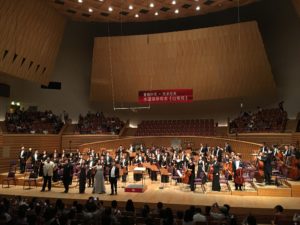 Classic of Mountains and Seas

Classic of Mountains and Seas is a sinfonia concertante in five movements inspired by the Chinese myth about the world is created and balanced. It stands out among all the pieces that have emerged during the past two years when it was urged by those on high to use Chinese mythology as the guiding principle for new commissions. I only wish that the piece was longer to fully showcase Zhou’s masterful mixture of ethnic elements with western instruments. 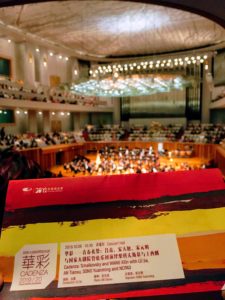 October 6
Wang Xilin’s Symphony No. 10. Lü Jia (呂嘉) conducted the National Center for Performing Arts (NCPA) Orchestra at the NCPA in Beijing in the mainland China premiere of the work.

Commissioned by the Macao Orchestra celebrating the orchestra’s 35th anniversary and given its world premiere in May, Wang’s Symphony No. 10 received its mainland China premiere during a week of colourful celebrations of the 70th anniversary of the People’s Republic of China. One had to go through intense security checks to enter the well-guarded NCPA. The work, according to the composer’s notes, is a tribute to youth, to love, and to the nation. Or is it really so? It is still too early to answer, but it is certainly the first time Wang has posed a riddle by hiding his secrets in the many layers of this orchestral requiem. 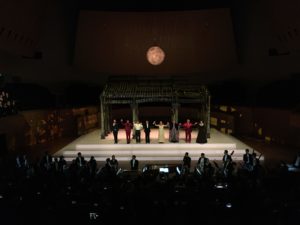 In 2010, the KT Wong Foundation introduced Semele to China in a La Monnaie production directed by Zhang Huan. After almost a decade, it has been revived in Shanghai in a concert version, directed by Julia Burbach, in a re-imagined production projected from the prism of feminine power and self-sacrifice. Some counterproductive and vulgar props from the original production were replaced by ingenious and succinct lighting effects that were strengthened by a superb cast. The cast included 20 members from the English Voices, 24 members from the Shanghai Symphony Orchestra, and Benedict Williams on the keyboard (harpsichord and chamber organ), led by Long Yu in a pit placed in the empty front rows. The ensemble provided defining continuo, supported the flowing melodies and proved to have a flair for the dramatic. Baroque operas are on the rise in China, for example Handel’s Serse was just staged in Beijing in October, and this performance was the epitome of elegance, subtlety and good taste. 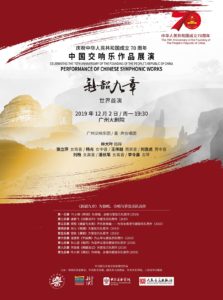 Nine Movements of New Shao Music is an orchestral suite in nine movements commissioned by the city of Shaoguan. The suite was inspired by the ancient but lost Shao court music dating back some 5,000 years ago up to the age of the fabled Emperors Yao and Shun. It is a collaborative work by eight composers, led by Ye, who contributed the first and the final movements. The work is not intended to restore Shao music, but to recall and establish what had been the meaningful context of Shao music: morality, loyalty, grandeur, faithfulness and other values held dear by the Chinese people. Each movement represents a certain aspect of the Shao, some dealing with the pure majestic soundscape, some immersed in a storytelling with a distinctive style contributed by the individual composer.
The collective effort and joint authorship indeed carry a very strong socialist accent, however, they provide the younger generation of composers an opportunity to work as equals with the older masters and with the conductor and orchestra. I can only imagine how much the young composers have benefited from such projects. 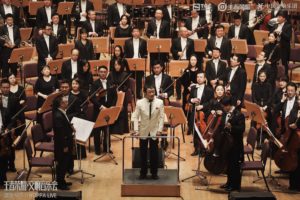 The China National Symphony Orchestra made a well-calculated but bold move in December under the new leadership by launching a three-concert tour produced by Hoppa Live in Shenzhen, Shanghai, and Beijing performing the re-orchestrated sound track to the highest-grossing online video game Honor of Kings (王者榮耀) under the baton of its chief conductor and vice president Xincao Li (李心草). It is a multiplayer online battle arena released by Tencent with original music by Hanz Zimmer, adapted and orchestrated for the tour by Shaosheng Li and Yang Zheng. The tour has generated phenomenal attention and attracted a whole new community, most of them gamers, into the concert hall.

Meanwhile, Jack Ma (馬雲), Alibaba’s founder and China’s richest man, made an unexpected conducting debut on 8 December at the Silk Road International Culture Exchange Centre in Langfang in Hebei Province during the annual general assembly of the China Entrepreneur Club. At the end of the ceremony, he came to the stage and led the China Philharmonic Orchestra in the Radetzky March by Johann Strauss I, under the watchful guidance of the orchestra’s music director Long Yu. A video of him waving the baton on the podium went viral and drew widespread debate on the role of a conductor, but the episode was definitely good for the orchestra in particular and classical music in general in terms of the astronomical exposure they received as a result of having Jack on the podium.