On Nature vs Nurture 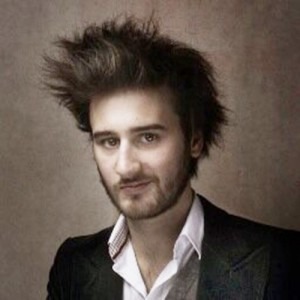 How do you manage to sustain a career as a harpsichordist and jazz pianist? For 23-year old Jean Rondeau it’s no problem. Equally at home on the concert stage in a chamber music recital of Rameau as improvising free jazz with a bass and drumkit, Jean has already received first prize from the International Harpsichord Competition in Bruges, and won the EUBO Development Trust prize, whilst still finding time to direct jazz band Note Forget.

Despite the assumption that the musical worlds of royal court and cocktail bar are as far as you can get, Jean uses both to infuse his playing with constant questioning and evaluating, the results of one feeding a question to the other.

I catch Jean in Belgium, where he gave a concert the day before last. He’s working on his next CD, due for release in February 2016, entitled Vertigo, after a piece by Royer, a contemporary of Rameau, who are both featured on the new disc.

‘The eighteenth century was one of the best for the harpsichord – it shaped the instrument’s identity. I think this is why I have a particular affection for the era of Bach and Rameau.’

The harpsichord’s identity is perhaps unlike any other instrument, in that it formed a sort of vacuum sandwich: its heyday in the eighteenth century was followed by an unbelievably rapid decline into hibernation, which only seemed to end at the beginning of the twentieth century. Despite its (unjust) outdated connotations, it’s certainly come a long way over its four centuries-long shifting in and out of the spotlight.

‘The instrument has a peculiar history. The instrument was completely central to the eighteenth century – and then it disappeared from the musical world.

‘It was forgotten. During the French revolution, it was a symbol of the monarchy; they were thrown out of windows and burned because they were a strong sign of the times. In 2015 the harpsichord is not a political symbol, so at least there’s no image to change in this way!’

The effects of its breakup with the course of history are still being felt today. Modern music exists for the harpsichord; but Jean feels there’s too much tentativeness when it comes to this misunderstood keyboard.

‘We’ve lost a whole heritage of literature. The violin’s also been around since the eighteenth century, but that instrument’s always been written for. There is a strong tradition there.

‘There’s less contemporary repertoire for harpsichord because there’s nothing before it. Composers have to know the instrument really well in order to write music for it. If you play the clarinet but want to write for the violin, you have all the repertoire there. If you play the clarinet and want to write for the harpsichord, there’s barely anything to go on.’ 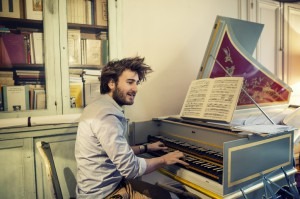 Jean was ‘seized by the sound’ of the harpsichord when he was five years old, and spent ten years studying with renowned harpsichordist Blandine Verlet.

An unhappy affair with the piano ended up with him leaving the music school close to his home in Paris, which led to him meeting jazz pianist Sylvain Halévy. Halévy’s teaching method was a lot freer than the conservatoire environment which Jean had experienced, and in Jean’s own words, ‘when I discovered jazz and improvisation, they completely seduced me, and I’ve played jazz since then’.

This apparent double life of classical harpsichordist and jazz pianist isn’t so disparate as you might first think.

‘Jazz music and improvisation help me to reflect on my personal playing, and the things that link jazz and harpsichord are gestures.

Jean often plays his compositions with Note Forget, but believes that writing music has more than the end goal of being performed:

‘I like to write music, both jazz and for the harpsichord music. It’s not my main activity, but I think composition is very important in a musician’s life. I try to write music every day, but it’s not always music for being played.

‘Today, all music is written with a goal – this isn’t a good approach. If we think like this it’s like we’re always thinking in the future, and not the present. A good writer is always writing – there’s a reason he’s a good writer. He’s been writing since he was a child. He doesn’t do his studies in writing and suddenly get his diploma and get published!

‘That’s why I don’t always trust an academic approach to music. It’s more to do with nature, than with nurture.’