In Tune Society
Are We Going to Party?
Groupmuse
by Oliver Pashley November 12th, 2014 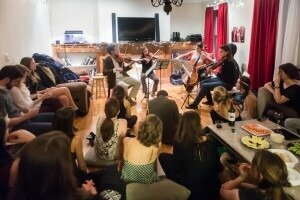 ‘In this modern world, we are constantly confronted by this question of how best to spend our free time’, explains Sam Bodkin. ‘Are we going to engage with a challenging work of art?’ he asks.

‘Or are we going to party?’

Bodkin and his team are fusing the ideas of ‘enjoyment’ and ‘enrichment’ together with Groupmuse, an enterprise bringing classical music into people’s houses – and blowing stereotypes out the water.

Groupmuse started out in Boston, USA, and grew from the east coast to San Francisco, and is now making its way via Seattle to New York, where there are already up to four ‘groupmuses’ a week. Bodkin’s idea came from coupling the mechanism of couchsurfing.org with the desire to bring a wider audience to classical music.

Musicians create profiles on the website and are selected for events by the Groupmuse team, with each event (‘groupmuse’) consisting of a party starting off with classical music.

All the money made on the evening goes to musicians, and the money comes from an ‘all but compulsory’ donation. And the hosts? They don’t pay to host, and don’t get paid; the space itself that they offer is supporting the arts, and getting music heard.

Bodkin explains clearly and passionately, ‘It’s about figuring out how to work it into the fabric of our social lives right now. You can’t tell people to get invested in something that involves them going out of their way to go to concerts. No – just go to a party on a Friday, you bring your friends, and we’ll bring some Beethoven, and you can come and see what’s up.’ 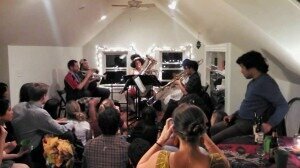 And for him, this late introduction to classical music was incredibly powerful.

‘It gave me the perspective to think about it in terms of what the wider world needs, not what ‘classical music’ needs. One of the rallying cries of the classical music world is we need to ‘save classical music’, but it’s blind to the reality that you don’t want to save something you don’t care about.’

‘The growth mechanism is entirely organic. It’s all about finding a few key community members who aren’t in the classical music world – you say to them ‘You gotta come to this thing. Bring a couple of friends – it’s just a house party and a concert. At the very least it’ll be a fine night.’ 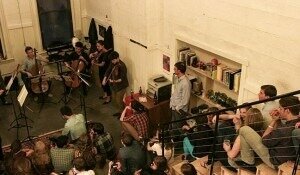 ‘They come, and they find that not only is the musical experience mindblowing, but also by virtue of the fact that there’s a group of strangers all huddled together on a living room floor in a stranger’s home, sharing this intimate work of art that takes them to unfamiliar emotional spaces together, the closeness, the intimacy and conviviality that is induced by that very particular atmosphere is just unforgettable, and the music plays the central role in that.’

The idea is that people get hooked on the experience, come again, invite more friends, see familiar faces, then eventually perhaps decide to host their own event. They then invite their friends…and the circle continues.

Groupmuse is not a charity – it’s a profit-seeking enterprise, whose revenue model includes bringing the Groupmuse experience to the corporate world. Companies who, in Bodkin’s words, wish to ‘enrich their culture’, and have the means to do so, can contact Groupmuse and pay for quality performances in their offices. This flow of revenue enables Groupmuse to continue to grow and, importantly, keep the fundamental aspect of their project – the free house parties – at the centre of what they do.

‘If we can harness the motive of commerce in the service of classical music, it will just be an engine, and the more it moves forward, the more it spreads joy and genius.’

The only stipulation for a groupmuse is that half the experience has to consist of ‘standard repertoire’, defined by Bodkin as ‘pre-1950s tonal-ish’. The other half can be anything, from Brazilian pop to Irish folk fiddle. This constraint means that Groupmuse stays on its track of keeping classical music alive and kicking.

‘In an era where so many startups are based on whimsical quirks of human behaviour that could disappear at any point, the meaty centre of our product is the greatest accomplishments the human mind can lay claim to.

‘We need more substance in our culture, we need more beauty in our world, and we need opportunities to gather in real space, in real time, to share something significant with the people around us, and remember that we’re human. I think to myself ‘can classical music check all these boxes?’

‘And ultimately, yes, it absolutely can.’