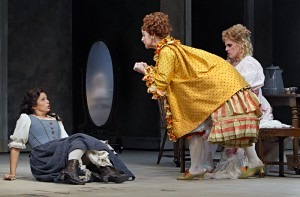 Who doesn’t know the story of Cinderella? The tale of a young girl tormented by stepsisters, who with the help of her fairy godmother, pumpkin carriages and glass slippers, goes to a ball and marries the prince. But is it still a Cinderella story if we strip it from all its magical glory? Is it still Cinderella without the fairy godmother?

To be fair, not all versions of Cinderella have the ubiquitous fairy godmother. Giambattista Basile’s Cenerentola was dressed for the ball by a fairy living in a date tree. In the Brother Grimm’s Aschenputtel, there was the magical hazel. A Scottish Cinderella named Rushen Coatie was aided by a magical red calf. The fairy godmother we all know was introduced in Charles Perrault’s Cendrillon in 1697, but the 1810 Isouard/ Etienne opera replaced her with Alidoro. He was still a magical character in the opera, who carried around a mysterious rose that transformed Cinderella for the ball.

The one crucial difference in Rossini’s La Cenerentola from all the other versions was its complete lack of supernatural elements in its plot. La Cenerentola’s Alidoro was neither a fairy nor a mage. He was just Prince Ramiro’s wise and trustworthy tutor. 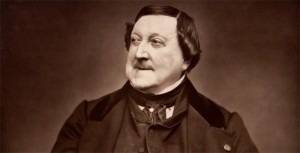 Like many of Rossini’s operas, La Cenerentola was written in a very short period of time. 25-year old Rossini, riding on the success of The Barber of Seville at the Teatro Argentina in 1816, was commissioned by the rival Teatro Valle to write an opera for the following year, but he only left himself a few weeks to write the work before its deadline, having spent some time in Naples (his then home) to write two other operas.

Brainstorming late night after Rossini’s initial libretto for a French comedy inspired by Françoise de Foix, a mistress of Francis I of France was turned down by the censor, Ferretti later recalled that ‘weary of making suggestions and half-dropping with sleep, I uttered (halfway through a yawn): Cendrillon. Rossini, who to concentrate better had got into bed, sat erect like Alighieri’s Farinata: “Would you have the courage to write Cendrillon for me?” he said; to which I replied, “Would you have the courage to set it into music?” 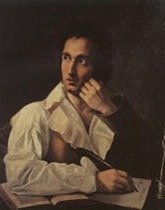 Ferretti’s libretto was stripped of all the supernatural elements of the original story. Gone was the fairy godmother, in place was the flesh-and-blood Alidoro. Gone too were the pumpkin carriages. Cenerentola never had to keep track of an impending stroke of midnight, or lose a glass slipper that would only fit her small feet. (In the opera, she gives one of her bracelets to Prince Ramiro instead.)

Ferretti notes this omission in his foreword: ‘I would like to inform you that it should not be regarded as a mistake if [Cenerentola] does not put in an appearance in the company of a magician who does conjuring tricks, or of a talking cat, and if she does not lose a slipper at the ball, as on the French stage or in a large Italian theatre,’ he wrote. ‘The decisive factor was what can be done at the Teatro Valle in terms of staging.’

In truth, both Rossini and Ferretti disliked any form of magic. It was widely reported that Rossini would only accept Ferretti’s libretto on the condition that there was no supernatural elements involved.

Without any magical artifice, La Cenerentola became a pragmatic 19th century tale about a long suffering heroine, who after submitting to endless injustice by her unpleasant family, is finally recognized for her good heart and marries the prince. And perhaps, that was what Rossini and Ferretti intended all along. The subtitle of this opera ‘Goodness Triumphant’ says just as much. Under the guise of comedy, La Cenerentola tells a very human story.