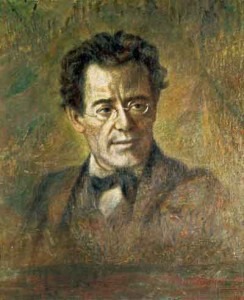 On 17 March 1907, Gustav Mahler (1860-1911) resigned the Artistic Directorship of the Vienna Court Opera. For years on end, discontent over his lavish salary, his extended musical tours promoting his own works, and persistent anti-Semitic attacks had finally taken their toll. Hoping to find respite from these tumultuous days in Vienna, the Mahler family left for their usual summer domicile in Maiernigg. Barely arrived, both daughters fell ill with scarlet fever and diphtheria, and after a two-week struggle, Mahler’s oldest daughter Maria Anna passed away. A few days after the funeral, the district physician Dr. Blumenthal was called to examine Mahler’s mother in law, who had suffered a mild heart attack. According to Alma, Gustav invited the physician to take a look at him as well, and to everyone’s surprise, discovered a disease of the cardiovascular valves. Although the condition was not fatal, Mahler’s already fragile mental state descended into a rapidly spiraling uncertainty that was increasingly occupied by morbid visions and deep trauma. Within a couple of short days, death was no longer an abstract concept — an unavoidable part of the human condition — it now had solidified into certain reality.

Unable to remain in Maiernigg, the Mahler family sought refuge in the small village of Toblach. In the tranquil surroundings of the Austrian Alps, Mahler’s initial despair progressed to a heightened awareness of life. This process was in part, inspired by a newly published collection of poetry called “Die Chinesische Flöte” (The Chinese Flute). This compilation of translated and stylized paraphrases of Tang Dynasty poetry clearly resonated with Mahler’s simultaneous awareness of the bitterness of mortality and the sweet sensuous ecstasy of being alive. This eternal union of opposites not only inspired a disembodied poetic vision; it also stimulated a musical setting of otherworldly transparency that seamlessly merged symphonic thought and vocal expression. We are not sure how far Mahler got with drafting Das Lied during the faithful summer months of 1907. We do know, however, that it was completed in the summer of the following year. Ironically, Mahler did not live to see the first performance of the work, conducted 1911 by Bruno Walter in Munich.


For his musical setting, Mahler selected seven texts by Li Bai, Qian Qi, Meng Haoran and Wang Wei. Making significant alterations and interpolations to the poems, Mahler fashioned six movements with clear symphonic intent. The first movement “Das Trinklied vom Jammer der Erde” (The Drinking Song of Earth’s Sorrow) opens with a furious defiance of grief. A powerful and sweeping fanfare in the horns clashes with fluttering woodwinds, and a rebellious tenor enters at the top of his range and at full volume. Forcefully advocating the use of wine to temporarily dispel doubts and fears, the music eventually collapses into the refrain “Dunkel ist das Leben, ist der Tod” (Dark is life, is death). Imparting a sense of urgency and growing desperation, this refrain is pitched a semitone higher with each successive appearance. For the contrasting musical exploration of the beauty and eternity of the universe, Mahler relies on gentle strings and quiet woodwinds to provide a shimmering and ethereal vision. This sense of relief is short-lived, however, as the music quickly regains the ferocious energy of the opening section, and a resigned statement of the refrain is answered by a final, defiant forte in the orchestra.

Contrasting the defiance of the opening movement, “Der Einsame im Herbst” (The Lonely One in Autumn) is a gentle and weary reflection on the transitory nature of life. Subdued and hushed string passages accompany an aimlessly meandering oboe melody. This melody opens with an important three-note motif that Mahler uses throughout the work to musically unify the entire composition. The long and sustained vocal phrases are carefully projected against a remote instrumental background in an exquisite example of Mahler’s linear counterpoint. A final passionate outburst quickly subsides into profound resignation. Mahler’s use of pentatonic scales and colourful orchestration in the third movement “Von der Jugend” (Of Youth), stands as a prime example of musical “Chinoiserie”— a recurring theme in European artistic styles that reflect Chinese artistic influences. This movement provides a cheerful yet nostalgic look at the innocence of youth, with soulful string passages in the minor mode contrasting the bright accents set by piccolo flute and the triangle. Although “Von der Schönheit” (Of Beauty) also referenced love, it is no longer entirely innocent. The music contrasts a gentle and legato melody depicting the maidens with a rushed passage portraying young men on horseback. “Der Trunkene im Frühling” (The Drunkard in Spring) returns us to the sentiments of the opening movement. This time, however, Mahler injects a sense of humour through the skillful juxtaposition of the drunkard staggering to bed and the contrasting gentle evocation of spring.

The concluding movement “Der Abschied” (The Farewell) combines and sets two poems. Immediately projecting a somber and tragic atmosphere, the ominous sounds of drums and bells are pierced by the painful cry of the oboe. A melancholy and marching rhythm provides the transition to a haunting narrative, accompanied by a single flute and a single held note in the double bass. Momentarily silenced by cheerless interludes, the narrative returns repeatedly to evoke images of nature. The longing and plaintive sentiments gradually fade into silence, and the opening returns with portentous and increased intensity. Gradually, an extended funeral march emerges to introduce the farewell section. The narrative is set in total darkness, as the friend is now traveling home for the last time. Mahler himself provided the text for the final stanza. Apparently, while taking a nostalgic look at his own life, he sought to inject a sense of quiet optimism into the music. Scored in the major key, harp arpeggios support lush strings, and the vocalist is instructed to repeat the word “ewig” (forever), in ever-quieter tones, concluding the work on a deeply personal note.