Murder in the Rue Careme-Prenant 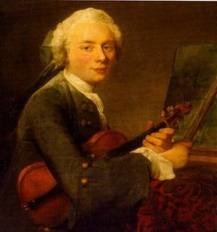 In the early morning of 23 October 1764, the violinist and composer Jean-Marie Leclair (1697-1764) was found lying dead in the vestibule of his house in a pool of blood from three vicious stab wounds to his neck. Jacques Paysant the gardener, who quickly became the first police subject, discovered the body. Although Paysant’s testimony contained various contradictions, the police soon turned their attention to Guillaume-François Vial, the forty-year old son of his sister Françoise, who detested his uncle for not having assisted with his career. However, there was also the suspicion that Leclair’s second ex-wife, the engraver Louise Roussel who had printed much of his music, was behind the grizzly murder. Louise had fallen into dire financial straights, and the death of her ex would certainly allow her to auction his house and all belongings, including all his unpublished compositions. Despite a thorough police investigation, however, the identity of the murderer or murderers has remained a mystery until this day.

The exact circumstances of his untimely passing might indeed be a mystery, but there can be no doubt that Leclair was the first great French violin virtuoso, and contemporary voices rightfully described him as the “French Corelli.” The French musicologist Georges Poulain, Comte de Saint-Foix, writing at the turn of the 20th century, goes even further: “His violin concerti, and his flute concerto, with all their spirituality, their liveliness and their touches of genius prove to us, with the richness and the well-turned phrasing that are his alone, that he possesses knowledge of both solo instruments and of the symphonic science. We are tempted to call him, for the technical power of his skills, the French Bach.”

Leclair came from humble beginnings. He was born in Lyon as the son of a haberdasher and amateur musician, and during his early years he performed both as a dancer and violinist at the Lyon opera. After a season with the Turin opera in 1722, Leclair came to Paris and published his first set of violin sonatas. For the next couple of years the composer commuted between Paris and Turin, taking violin lessons with Giovanni Battista Somis — a Corelli student — in the process. By 1728, Leclair became part of the “Concert Spirituel,” one of the first public concert series, and after the death of his first wife, he married Louise Roussel. His four-year appointment at the court of Louis XV was overshadowed by intense jealousy and numerous intrigues involving his fellow composer Jean-Pierre Guignon, which eventually forced Leclair to take an appointment with the Princess of Orange in the Netherlands. He took lessons with Locatelli in Amsterdam, and dedicated a number of compositions to the Princess. He returned to Paris in June 1743, but quickly traveled to the court of the Infante Don Felipe at Chambery in Spain. Returning to Paris in 1745, Leclair composed his opera Scylla et Glaucus on a text from Ovid’s Metamorphoses. Although the opera was politely received, Leclair’s future was nevertheless bound to his skills as a violin virtuoso. By 1748 he was in the services of the Duc de Gramont as the principal violinist and director of his private orchestra. After the break-up of his marriage, Leclair in precarious circumstances on the outskirts of Paris, and was playing billiards with a musical friend on the evening of his murder.

Leclair’s musical legacy primarily rests with a small but nevertheless attractive number of compositions for the violin. At his best, his works embodied simplicity most often combined with an earnest, reflective spirit. On publication in 1734 of the Third Book of Sonatas for Violin, dedicated to the King, the French poet and author Serré de Rieux was to write: “Leclair is the first composer who, imitating nothing, has created something fine and new, something that is distinctively his own.”