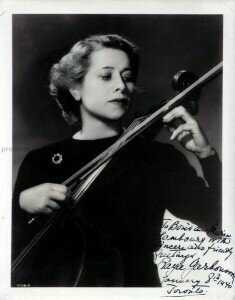 The eminent cellist, Raya Garbousova, had it all—a gorgeous cello sound, formidable technique, boundless energy, and movie-star allure. Born in Tbilisi, the Capital of the country of Georgia, in 1909, (there are some disputes about her age. Some sources list her birth year as 1906,) “she was reared on little food but plenty of music.” Her father was the principal trumpet of the Tbilisi Symphony and professor at the conservatory of music. At age four, Garbousova began her music lessons on the piano, but after hearing a friend of the family play his double bass—none other than the famed future maestro of the Boston Symphony—Serge Koussevitzky, she fell in love with its deep tones. Raya’s father resisted her pleas. Women didn’t play the cello in those days! When she refused to practice the piano, he finally relented and bought a small cello for her. She was six years old. Raya’s playing developed quickly, and she was immediately accepted by the Tbilisi Conservatory.

Like other prodigies, Raya practiced incessantly, but she credited her enriched life to two people who lived in the same house—a tailor who introduced her to the great literary works, and a shoemaker who encouraged her interest in philosophy. Throughout her life, she would be passionate not only about the cello and music, but also travel and literature. At the age of 80, she said, “To this day I actually need the other arts. I object to any notion of the artist being isolated in his own discipline; we have to be citizens of the world of arts and thought.”

By age fifteen, Raya performed Tchaikovsky Rococo Variations in debuts in Moscow and Leningrad, and she was in demand as a chamber musician with other Russian artists making names for themselves at the time, Nathan Milstein and Vladimir Horowitz.

In 1925, Raya travelled to Leipzig to study cello with Klengel, but he, after listening to her playing for several hours—all the most difficult studies by Piatti, Grützmacher, Popper, and the Davidov Concertos—shook his head in amazement declaring that he didn’t have anything to teach her. Garbousova made her Paris debut in 1927. There she met Pablo Casals, who agreed to give her some lessons, but he encouraged her to study with another protégé Diran Alexanian, who became her primary mentor, and greatly influenced Raya’s approach to cello-playing.

An appearance with the Boston Symphony, with Serge Koussevitzky conducting, followed by her 1934 New York Town Hall recital debut made her a star. Olin Downes, music critic of The New York Times, stated in his review, “She has a wonderful wrist and bow arm, and a left hand of the most exceptional fleetness and virtuosity… in a very few minutes she proved her exceptional talent, sensibility and musicianship…a figure to reckon with in the concert world.” 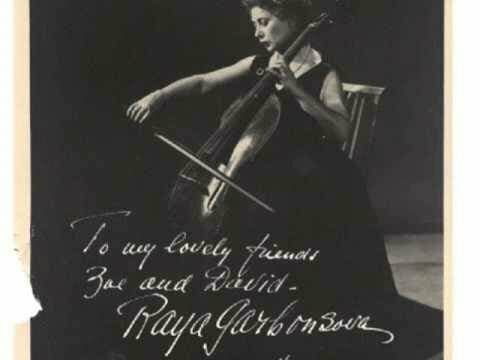 After Garbousova emigrated to the U.S. in 1939, she began to record many of the major cello works. Audiences were enticed by her engaging personality, her brilliant technique, and her expressive and insightful playing. Garbousova’s willingness to broaden the possibilities of the cello led many composers to write for her including Samuel Barber, whose Cello Concerto was commissioned and written for her. She premiered the concerto in 1946 with the Boston Symphony, conductor Koussevitzky at the helm, and with the New York Philharmonic, Dimitri Mitropoulos conducting in 1947. Garbousova’s 1966 recording of the piece has been repeatedly reissued. Barber’s gorgeous lyrical Cello Sonata Opus 6 reveals the poignant possibilities of the instrument.

Other premieres followed—Bohuslav Martinů’s Sonata No. 3, and Prokofiev’s Cello Sonata. Garbousova championed American composers, including Randall Thompson and Gunther Schuller, who in 1951 wrote his “Fantasy” for her. In 1990, he composed a work for cello ensemble in her honor entitled “Hommage à Rayechka”, commissioned and premiered by 22 cellists in Tempe, Arizona at the 1990 Cello Congress.

Garbousova was also a legendary teacher. She was professor of cello at Hartford University, from 1970 to 1979 and at Northern Illinois University from 1979 to 1991.

Raya rubbed shoulders with all the greatest artists and composers of the time including the above-mentioned collaborators as well as Piatigorsky, Rachmaninov, Huberman, Szigeti, Szell, Feuermann, Erika Morini, Eva Heinitz, and even Albert Einstein. An effusive communicator, who had a great sense of humor and warmth, her fortunate students had not only a marvelous cellist as a teacher, but also a window into the great musical traditions of the past. She gave master classes all over the world and was always cognizant about being helpful without undermining the student’s permanent teachers.

Raya Garbousova died in De Kalb, Illinois, on January 28, 1997. Steven Isserlis wrote upon hearing the news, “The sadness can only be mitigated by gratitude for having had the chance to know this glorious woman,” and in statements made at her memorial, Janos Starker said, “She played on a level of artistry that earned her a place among the handful of truly greats of the century.”