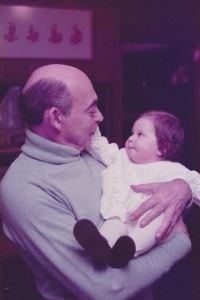 For as long as I can remember, family gatherings have been synonymous with music making. Sometimes this took place in fancy concert halls, but more often than not, my family would simply come together in the music room. As a young child I would watch in awe and dream of the day that I could join them.

One of my favorite Starker family visits was every December in Bloomington. In the afternoons, my grandfather and I would sit at the kitchen counter and play Yahtzee. In between rounds, he would light his cigarette and we would snack on Hungarian peppers and salami while he told a joke or a story. I loved this time together but the best day of the trip was always New Year’s Eve. My grandparents always hosted a big dinner party, complete with spontaneous chamber music. Once the clock hit midnight everyone gathered around the piano for Schubert’s four-hand Fantasy played by Gyorgy Sebok and Bernard Heiden. After the final chords, the drinks were refilled, the cigarettes relit, and the real party began. Music, laughter, and smoke filled the house through the night. 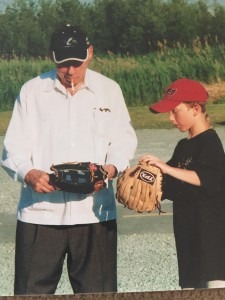 When I was about ten years old, my grandfather asked me to play my latest piece for the New Year’s party. I’m sure my Seitz concerto was far from the highlight of the night but my grandparents were proud and I couldn’t have been happier. Six years, and many party performances later, Grandpa called and invited me to perform the Saint-Saëns La Muse et le Poète with him at the World Cello Congress.

I probably should have been nervous or intimidated for our first rehearsal together but I just thought it was a fun way to spend time doing something I loved with my grandfather. From that first rehearsal he called me “partner” and that’s exactly what we were. He never told me what to do but I could tell what he wanted from his playing, encouragement, and love.

We played together a few more times in the years that followed and I was always inspired by his artistry and professionalism. On one of my last visits to Bloomington before he died, I heard the unique sound of his exquisite playing coming from the music room. I went to the doorway and watched him as he played. His eyes were filled with happiness as his hands effortlessly shaped notes into beautiful phrases. As the final notes hung in the smoke filled air, he saw me and mumbled, “Hi partner.” 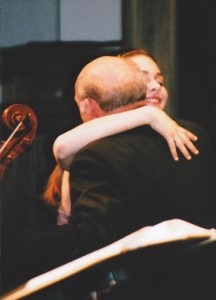 The fact that the beginning of my adult life intersected with the end of my grandfather’s is something I will always be grateful for. He laughed when I told him this 3 years ago. I was 19 at the time and trying to be as adult-like as he was treating me. Some of the other people on the red reclining chairs of the Bloomington family room found the comment gloomy and off putting. But, he seemed to get real pleasure out of it. I would like to think his smirk in that moment was in recognition of pragmatic appreciation as an inherited trait.

I was very close to my grandfather. He is my hero – the genetic map I search when I am looking for the best in myself.

Our relationship started (beyond the typical grandson/grandpa: christmas gift, school picture on the wall, report card updates kind of relationship) when I was 11. This happened because I said I wanted to play the cello. I remember feeling like royalty being generously lent my first half sized cello by Michael Remenyi, and the exuberant excitement of my teacher, Kristine Bogyo, as she pondered what the musical development of a Starker would look like. Grandpa then wanted me to study with Winona Zelenka who he felt embodied his teaching methods.

The first time I visited Grandpa in Bloomington as not just his grandson, but his grandson the cello student, everything changed. I was swooped under his arm and off to class at IU we went. I truly felt like the Robin of the cello. He was Batman, but with a scarier death stare. He brought me in to meet everyone at the school, and I felt instantly welcomed in the studio, especially by his students, maybe because I was family, maybe because they thought having his grandson in the room would make for a more forgiving lesson. Suffice to say, I did not become a cellist, but over the two years that I played, in every philosophical conversation on the drive to school, every salami and green pepper breakfast before the drive, I became his grandson the person to him, and being the cello student wasn’t so important anymore. 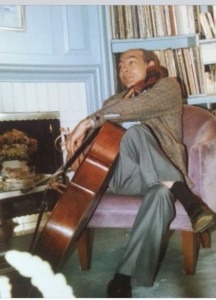 It was my grandpa the person, who meant the most to me. Of course like everyone else I am dumb-founded and amazed by what he did for music, but he truly was just as exceptional without a cello in his arms. It must have been the second or third last time I visited when I told him it was most important to me to have copies of all his stories. There are so many wonderful ones that didn’t make his book. It was during those last visits I tried very intentionally to have every meaningful conversation with him I possibly could. We knew he was near the end, he wasn’t shy about saying it. He told me then that he had had everything he’d wanted from his life, except a painless death. His bluntness was both difficult to hear and a compliment. I was glad he felt comfortable enough with me not to feel the need to sugar coat. I asked him over one of our salami breakfasts, (I should mention I was a vegetarian at the time, that kitchen counter was an exception zone) what it was that he believed in. I already knew my grandfather was far from a religious man, but surely such lifelong commitment must come with an equally unwavering belief in something. Beauty, he told me. He believed in beauty.

It is this conversation I still think about every day. Behind his level of mastery, his dedication, his lifelong pursuit of the highest possibilities in music, there was an ideal, and in this conversation I got a glimpse of that ideal. The exact angle of his bow arm, the intention and precision of every fingering, the subtlety of his vibrato, the purposeful unexaggerated nature of every movement…. he dedicated his life to the pursuit of that molecular unfolding of beauty, and the guidance of others to do the same. Although he very rarely spoke of his time during the war and of being a holocaust survivor, if anything is the opposite of genocide, it is that pursuit of beauty. He witnessed man’s capability for evil in its purest form, and I cannot help but think that that had something to do with the clarity and passion in which he led a life creating and sharing what I would consider humanity in its purest form. He said to me on my last visit, as he did to many of his students over the years, “carry the flag.” I think this is what “carry the flag” means. Whether it be with the cello, with music or with anything else, it is to live a life that relentlessly pursues the greatest potential of our humanity. 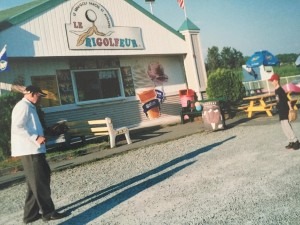 The cello was the instrument with which my grandpa did this, song writing is the instrument with which I am trying to. His attempts to understand my world of music, which he had little to no knowledge of, made me so happy. He once was up in the middle of the night watching the TV program ‘The Voice’ to try to get a better idea of it. Mind you, although that show really is not representative of what I’m doing, the sentiment and his effort meant the world to me. He called me that week to suggest I write a pop song in 5/4 time with an accompanied dance that could be an international craze. Of course I had that song written by the next day. The dance never happened.

If you “carried the flag”, my grandfather respected you, regardless of the instrument with which you did so, whether you were a doctor, writer, politician or whatever. (well, maybe not a politician) Although he did not hold back to tell me how simplistic he considered my songs to be, “why no key changes!” he would say. Still he would always let me know how much he appreciated the lyricism, which is what I care about most. I wish he could hear the music I’m making now, and I hope he would see, that although I don’t share his genre or his instrument, I have inherited his intention, and I intend to carry it with every bit of Starker commitment I have in me. 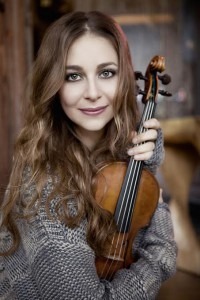 Alexandra Preucil was appointed Assistant Concertmaster of the Cleveland Orchestra in April 2013 and has been a member of the violin section since 2008. Ms. Preucil graduated from the Cleveland Institute of Music with a Bachelors degree in music and a minor in dance. While in school, she held the position of Assistant Concertmaster with the Akron Symphony Orchestra and the Canton Symphony Orchestra and was a member of the Svanito Quartet. Ms. Preucil was selected to be in the Cleveland Institute of Music’s Young Artist Program during which time she was concertmaster of the Cleveland Orchestra Youth Orchestra. Ms. Preucil has appeared as soloist and chamber musician with ensembles around the world. She has performed at summer festivals including The Mainly Mozart Festival, The Highlands-Cashiers Chamber Music Festival, The Festival der Zukunft, The Orcas Island Chamber Music Festival, and Music From Angel Fire. In addition to performing as a member of the Orchestra, Ms. Preucil is active in teaching and community education programs and serves as Music Artistic Advisor to the Cleveland Ballet. 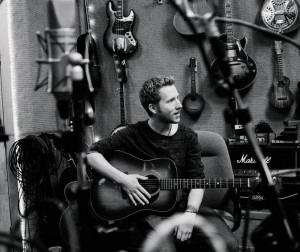 JP Saxe is a singer/songwriter currently working in Los Angeles as a songwriter for many high profile artists, and on his own soon to be released project as an artist. JP is a different kind of up and comer – a singer songwriter and multi-instrumentalist who impresses audiences with his lyrical ability and vocal creativity. He is also a strong proponent of positivity, passion and collaboration among the indie music community.

Article and most photos are from CelloBello.