You know the drill. As soon as the piano recital proper has finished, audience members—spontaneously or paid to do so—will furiously applaud in order to entice the artist to play additional pieces. Encores originated spontaneously but over time became so popular that they had to be officially banned, especially on the operatic stage. Pianists have always meticulously planned for their encores, and compositions by Frédéric Chopin are long-standing favorites. However, for encore performances Chopin rarely appears in unadulterated form, but is variously embellished and paraphrased to highlight pianistic pyrotechnics. Of course, it greatly helps if the performing artist is also an accomplished composer. Moritz Moszkowski was born in 1854, and the fabled pianist Ignacy Paderewski considered him a “second Chopin.” It’s hardly surprising therefore that Moszkowski fashioned a number of Chopin arrangements for his personal use.

Moritz Moszkowski: Waltz, Op. 64, No. 1 (Chopin)
Chopin’s “Minute Waltz,” specifically in devilishly difficult arrangements, turned out to be an all-time favorite for encore performances. Rafael Joseffy (1852-1915) received his piano lessons from Ignaz Moscheles, Carl Tausig and Franz Liszt. Acclaimed “as a master pianist of great brilliance,” he was also one of the most poetic of all pianists. Joseffy immigrated to the United States and made numerous concert appearances, yet he was also a painfully private man. Eventually, concert life did not agree with his nervous disposition, and he devoted himself to teaching, editing and publishing. His most important legacy to the pianistic world is his “School of Advanced Piano Playing,” and a number of highly musical yet incredibly difficult Chopin arrangements.

Rafael Joseffy: Concert Study on the Chopin Waltz Op. 64, No. 1 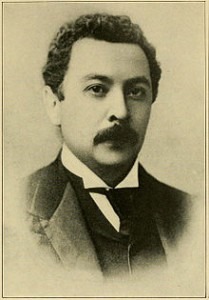 We often tend to forget that Johannes Brahms started his career as a performing musician. He studied with the Hamburg teachers Otto Cossel and Eduard Marxsen, and after the ten-year-old Brahms gave his first public recital in 1843, an agent immediately wanted to sign the youngster for a concert tour to America. Brahms’s parents declined, and after several more years of study Brahms became known as an accomplished pianist. In the event, Brahms eventually decided that there were already too many talented pianists in the world, and he focused on a career as a composer instead. During his time as an active concert performer Brahms fashioned a number of technical studies, including one based on the Chopin Etude Op. 25, No. 2. 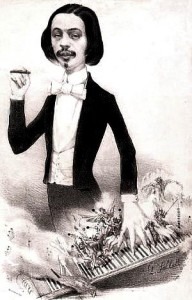 Italian virtuoso Fumigalli, who was famous for playing with his left hand

Richard Wagner viciously called Chopin “a composer for one right hand.” Leopold Godowsky, on the other hand, thought Chopin entirely suitable for left hand alone. A number of his fiendishly difficult Chopin studies are aimed to develop the mechanical, technical and musical possibilities of a pianist’s left hand. “They expand the peculiarly adapted nature of the instrument to polyphonic, polyrhythmic and polydynamic work, and to widen the range of possibilities in tone colouring. Special attention must be drawn to the fact, that owing to innumerable contrapuntal devices, which frequently encompass almost the whole range of the keyboard, the fingering and pedaling are often a revolutionary character, particularly in the twenty-two studies for the left hand alone. They should be considered in an equal degree suitable for concert purposes and private study.”

Leopold Godowsky: Chopin Etude Op. 25, No. 1 for left hand
The appeal of Chopin’s music is not merely celebrated in the concert hall. It easily crosses into popular venues as well. Just ask Władziu Valentino Liberace, who embraced a “lifestyle of flamboyant excess both on and off stage.” Liberace was a child prodigy and first appeared as soloist with the Chicago Symphony Orchestra at age 16. But his real calling came from the glitzy and glamorous stages of Las Vegas. For decades he delighted audiences by turning classics into pop music, and pop music into classics. Here then is a Chopin medley from the performer who proudly proclaimed, “Too much of a good thing is wonderful!”