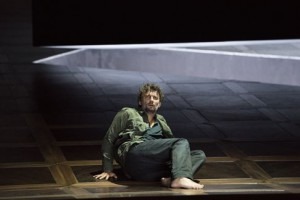 A highlight of this year’s Salzburg Festival was a new production of Beethoven’s only opera, Fidelio. It was largely deemed a vehicle to show off leading German tenor Jonas Kaufmann at his vocal and artistic zenith. And indeed, he did not disappoint. But they didn’t make it easy for him.

The direction and set of this production were so far out, it not only negated most of the opera’s lyrics, but it actually distracted from the musical quality of the performance.

Claus Guth, the German director with a solid reputation for thoughtful and provocative performances, clearly went overboard with his inspiration from the Matrix movies. What is a straightforward story of liberation of a political prisoner by his wife who dresses as a young man to gain access to the prison, becomes a convoluted depiction of internalized struggles in a parallel universe. The clarity of the action is not helped by the complete elimination of the original spoken dialogues. Guth substitutes them with a menu of sounds that emanate from the stage, which serve only to further disconcert the audience.

He invents alter-egos for some selected protagonists. Leonora has a good Doppelgaenger who comments in sign-language on her feelings, extremely irritatingly in the last scene, where she takes centre stage while the singing Leonore is relegated to the back of the set. The evil Governor Don Pizzarro, in full matrix garb including sunglasses and black leather overcoat, has a weaselling and contorting sidekick with a ready weapon at hand, a sort of Agent Smith dressed as Trinity from the Matrix’s. Florestan is left without an alter-ego, but made to jerk around the stage like a spastic lunatic, unable to revel in his salvation and the triumph of love over despotism. 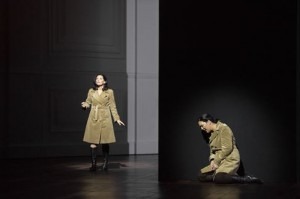 The stage set was an oversized neoclassical style room with wooden parquet, that is centred around a massive rotating black slab, permitting the singers and their alter-egos to appear and disappear, while throwing some interesting though ultimately meaningless shadows on the walls behind them.

Even the chorus was relegated to senselessness. The famous first act chorus was delivered by the scores of prisoners in white walking around the black slab as if pilgrims on the Hajj circumnavigating the Kaaba in Mecca.

This heavy handed and interventionist interpretation had one victim apart from the audience: the chemistry among the singers. It was hard to believe that any of the characters even cared for one another. And ultimately this manifested itself in the singing. 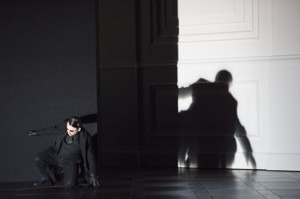 Adrienne Pieczonka put in a valiant effort in the long and difficult role of Leonore. Her powerful and rich soprano frequently got lost amid the over powering orchestra and the chaotic stage direction, and she didn’t sound totally comfortable with the coloraturas of the first act. Tomas Konieczny struggled to give his role the required evil character, in spite of his strong and clear bass-baritone. The kindly prison warden Rocco was portrayed by Hans-Peter Koenig, who looked like a disengaged bourgeois official with walking cane, rather than as a suffering victim of the system in which he is stuck. The role of Marzelline, Rocco’s daughter who is in love with Florestan (who she doesn’t recognize as being the disguised Leonore), was sung by Olga Bezsmertna. She put on in a great effort, but ultimately was drowned out by orchestra and cast.

At this point in his career, Jonas Kaufmann can do nothing wrong. Vocally the role of Florestan is a perfect match for his dark, smoky and virile tenor. From the nearly whispered “Gott wie Dunkel hier” to the bombastically delivered “Oh namenlose Freude”, Kaufmann took possession of the stage, leaving the audience gasping for more.

The star of the evening, however, was without doubt the Vienna Philharmonic under Franz Welser-Moest. One of the finest orchestras of the world, Welser-Moest led the orchestra through a remarkable overture and sparked near furore after the interjected 3rd Leonore Overture, applied as an Intermezzo in the second act. Though they frequently drowned out the soloists, the evening belonged to the Viennese musicians in the pit.