Features
How You Should Feel in the Key of G Major
by Maureen Buja March 4th, 2016 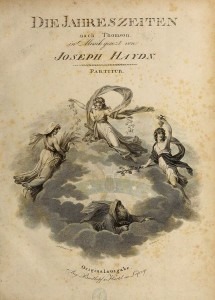 The title page for the first edition of The Seasons

The Austrian composer and pianist Ernst Pauer (1826-1905) was a student of Mozart’s son, Franz Xaver Wolfgang Mozart, before moving to London in 1851. He was one of the first piano professors at the Royal College of Music and also worked with the music faculty at the University of Cambridge.

Pauer saw the key of G major as the key of youth, a key that expresses sincerity of faith, quiet love, calm meditation, simple grace, pastoral life, and a certain humour and brightness. For his examples, he chooses works by Mendelssohn, Mozart, Rossini, Haydn, and Beethoven.

From Mendelssohn, he chooses a recitative and aria from part I of his oratorio, St. Paul, “Doch der Herr vergisst der Seinen nicht” (But the Lord is mindful of his own). The opening recitative describes the crowd at Damascus before the Voice of Christendom comes in at the aria to say that the Lord protects his followers – clearly part of Pauer’s sincerity of faith affect.

Mozart: Don Giovanni: Act I, Scene 14: Dalla sua pace (Kenneth Riegel, Don Ottavio; Paris National Opera Orchestra; Lorin Maazel, cond.)
Pauer also chooses Mozart’s “Symphony in D major.” This isn’t as specific as it sounds, as Mozart’s Symphonies Nos. 4, 7, 8, 20, 23, 30, 31, 35, and 38 are all in D major. Since Pauer was really looking at important works and we’re talking about the affect of the key of G major, we can look at two G major movements from the two late symphonies and see if we can figure out what he was looking at.

Symphony No. 35, the Haffner, has a second movement in G major. This Andante is a movement of graceful woodwinds.

Mozart: Symphony No. 38 in D Major, K. 504, “Prague”: II. Andante (Bavarian Radio Symphony Orchestra; Rafael Kubelik, – cond.)
However, the Prague symphony seems a less likely candidate for Pauer’s affect of G major. It turns towards the dark side too much to carry the sincerity and positivity that Pauer gives to this key.

From Rossin’s opera of Swiss nationalism, Guillaume Tell, Pauer chooses the “Ranz des vaches,” a pastoral instrument section at the beginning of Act I.

Rossini: Guillaume Tell: Act I Scene 1: Ranz des vaches (Santa Cecilia Academy Orchestra, Rome; Antonio Pappano, – cond.)
Haydn’s first part of his oratorio Die Jahrszeiten (The Seasons), Spring, provides us with Pauer’s next example, that of the first chorus. This chorus “Komm, holder Lenz!” is the chorus summoning Spring out of her wintery grave and asks her to descend while music “wakes around.”

Beethoven: Piano Concerto No. 4 in G Major, Op. 58: III. Rondo: Vivace (Murray Perahia, piano; Royal Concertgebouw Orchestra; Bernard Haitink, cond.)
In looking over all these works, and comparing them to list Pauer created for C major, we end up with a very different feeling. It’s more complicated than the innocence of C major.