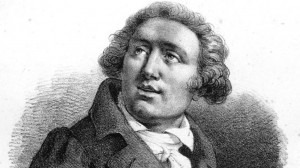 A shotgun wedding is commonly arranged to avoid embarrassment due to an unplanned pregnancy. As the name suggests, it is based on a supposed scenario that the father of the pregnant daughter must resort to some kind of forceful coercion to ensure that the young man actually follows through with the wedding. In rare cases, not even a shotgun is sufficient to entice a fellow to step up to the altar. In such circumstances, civil authorities have to step in and apply the necessary pressure. It so happened to Giovanni Paisiello and Cecilia Pallini, who have the rare distinction of having their wedding ceremony performed in prison! It all kicked-off in 1768, and as usual, things were not as clear-cut as they first appeared.

Paisiello was described as a dapper composer of supreme confidence and intellect. He was tall with clear and sparkling eyes, and a majestic forehead that somehow reflected his creative originality. His hair was long and curly, and had turned white at an early age. The rest of his face “portrayed a pleasant seriousness, and together with a sound and harmonious voice gave the impression of being animated by some kind of divine inspiration.” His biographer De Dominicis wrote in 1818, “Paisiello was an eager lover of the fair sex, always distracted and enticed by continuous opportunities for amorous intrigues and encounters.” Apparently, no theater nymph or grieving widow could resist his considerable charms and magnetism. At the age of 28, Paisiello met the aspiring Neapolitan soprano Cecilia Pallini, and the couple fell in love at first sight. Cecilia swiftly moved in with Paisiello, at first convincing nosy neighbors that she merely received music lessons from the esteemed composer. We are not entirely sure of Cecilia’s musical progress, however, we do know that she became pregnant.

Cecilia was said to be the widow of Felice Mazzinghi, a famed choirmaster from Livorno who had met with an untimely demise. Mazzinghi was a wealthy man, and had apparently left his wife a considerable fortune, including a dowry of 1800 ducats. Paisiello was in love, and a nice dowry certainly didn’t hurt either, so he asked for Cecilia’s hand in marriage. Before they could go through with the proposed wedding, Paisiello had a professional engagement in Livorno and to his surprise learned that Mazzinghi had never been married! Upon further investigation it turned out that Cecilia was not a widow, and there was no such thing as a dowry. Justifiably furious, Paisiello withdrew his consent of marriage and told Cecilia to get lost. But Cecilia would have none of it! She filed a petition with the king, including a substantial number of supporting documents, disclosing that she had lived with Paisiello in a “wild marriage” for more than 4 years. In addition, she had born his child, and had a formal, written promise of marriage. In short, Cecilia petitioned the king to have the relationship formalized, and the king agreed. Now it was Paisiello’s turn to furiously protest the ruling, and he steadfastly refused to marry Cecilia. In fact, his reaction was so vehement that the king had no other option but to throw the composer in jail. Minister Bernardo Tanucci announced a couple days later, that Giovanni Paisiello had wed Cecilia Pallini on 14 September 1772 behind the walls of St. James’ prison. This seems like a rather rocky start to marital bliss, however, as far as we know, the marriage was a happy one. Paisiello’s musical productivity soared, and the couple became inseparable. Not even prison, it seems, can suffocate true love.