Artists Behind the scenes
A Week In the Life
by Janet Horvath January 11th, 2012 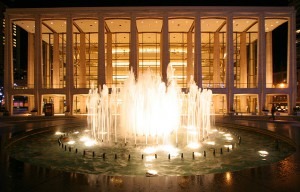 Non-musicians (civilians we call them) like to get behind the scenes. Sometimes they ask questions that surprise us, such as: “You play for a living — do they pay you for that?” or “What’s your day job?” or one I love especially — when I am home during the day practicing, and I answer a phone call — “Janet did I wake you?”

All of this prompts me to describe a couple of weeks we recently experienced that might shed some light on the rigors of orchestral life. While the time period I’ve chosen was unique, it included a tour to New York City still the musical and physical demands are those that symphony orchestra musicians encounter regularly.


Mahler Symphony no. 1 in D major “Titan” (1888)
Our orchestra was preparing to go to New York’s Lincoln Center to perform — always exciting, yet nerve racking! We had worked very hard to prepare the program, which included the wonderful, but long — hour-plus — Mahler First Symphony. Our performance was made even longer, because the so-called “Blumine” movement was included. (Mahler had originally composed the “Blumine” section as part of his Symphony No.1, but eventually decided to exclude it; orchestras sometimes restore it to their performances, not only for historical interest, but also for its beauty.)

Buses picked us up to take us to the airport around noon on Saturday. Getting one hundred-plus musicians and staff checked in and through inspection procedures is no small undertaking, especially in these times of heightened security. We managed the process on time, only to discover that our flight was delayed, causing us to arrive at Newark airport an hour late. We were herded onto buses and driven to the hotel in Manhattan. No time but to fall into bed.

Sunday morning, after grabbing a quick coffee and muffin, we boarded buses to Lincoln Center early enough to locate and unpack instrument trunks, warm up a bit for a 12:55 rehearsal, and play the 3:00 afternoon concert. The concert was a big success.

No time to bask in adulation for us, though. We raced to change out of concert attire and to pack up the instrument and wardrobe trunks. We were desperate for a bite to eat, and we would have liked at least a glimpse of the city, but no such luck. The buses were again waiting to whisk us to Newark airport.

Traffic was formidable and so were the lines at the airport. By the time we were prodded and searched and had removed our shoes and got to the gate, we were tired and famished. And guess what? The only available food offerings were in a little coffee shop with a small number of sorry-looking sandwiches and a bar with a surly hostess giving us the business for descending on a Sunday evening in what were, in her mind, unexpected and unacceptable numbers.

We boarded the airplane at 7:00, only to sit on the tarmac for an hour. There were umpteen planes ahead of us. We arrived in the Twin Cities very late.

Monday was a “day off.” Day off??? Are you kidding? I had to work on the Hindemith Mathis der Maler for Tuesday on a work that our orchestra had not done in more than twenty-five years. (As well as the other three works on the program.) I woke up with an intense headache at 7:00 a.m. to get my son to school. Then I got to it, practicing for most of the day while following my own advice for Playing (less) Hurt. Then quickly I ran to pick up my son from school, make dinner and help with homework.

Tuesday the orchestra rehearsed from 10:00 to 3:30. Wednesday the orchestra rehearsed from 10:00 to 3:30. Thursday we performed the program at 11:00 a.m. on our popular Coffee Concerts series. (Yes, that means the orchestra rehearsed the music for the first time on Tuesday, and we were performing it by Thursday.) The Thursday daytime concert was followed by Friday and Saturday night performances of this program. On Sunday, we had another afternoon concert in Orchestra Hall, and this time we performed an entirely different program, a season preview performance. We played a potpourri of selections from our upcoming season — loud and fast pieces, with a million notes, or so it seemed. And we did it with no rehearsal since we had performed this program two months ago. Talk about walking on eggshells.

And then we had one day off, and . . . well, you get my drift. The new week started all over again, with a whole new program to prepare before rehearsals began on Tuesday. Perhaps you noticed that the week I described had three different concert programs, along with an unpredictable and tiring tour schedule. Forget tasks of life such as grocery shopping, house cleaning and bill paying on weeks like these.