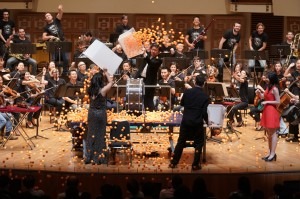 Andy Akiho’s new concerto, Ricochet, takes the idea of rhythm and makes it the center point of his whole piece. The piece opens with an extensive violin solo, but not a cadenza in the way that we’ve come to expect from ground-breaking composers, but a solo on the fractured theme that’s the source of the concerto itself. Ricochet is a triple concerto for ping pong, percussion and orchestra and its rhythm that drives this work. The soloists were Kristin Lee on violin, David Cossin on percussion, and duoists Michael Landers and Ariel Hsing playing ping pong. Landers’ and Hsing’s credentials are impeccable, both being the youngest US national table tennis champions, with Hsing also having 2012 Olympic credentials.

When you take virtuosos and write specifically for them, amazing work results. Cossin’s experience in new and experimental music came to the fore here – he plays tables, he plays bottles, and even, at the end, the bass drum. Lee was faced with a difficult modern score with rigorous rhythmic requirements. Landers and Hsing take a game that most of us know personally as involving chasing balls down a room, and which we admire at the highest level for its fierce battles that make the table itself just a microcosm of the play space, and make it a sonic playing field. Not only content to play with the standard paddles, they also play the game with glassware, tuned frame drums, and against other drums. The tick-tock of play becomes part of the sonic space. 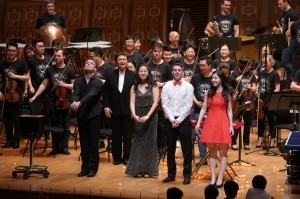 The recent performance by the Hong Kong Philharmonic opened with a caution: the announcer warned the audience to be aware of ping-pong balls that would be coming into the auditorium. The orchestra is pushed back on the stage to make room for a ping-pong table and two enormous boxes of orange balls. Just as soon as you get used to the sound of the regular paddles, and after an extensive percussion solo by Cossin on metal tubes, glass bottles, metal bowl drums, the paddles are switched to small frame drums (08:42). The pitched drums make a new sound against the orchestra, unfortunately, seeming to be a bit flat. At one point, Landers changes his paddle for a wine glass and, most of the time, the sound of the ball against the glass provides a brief ringing sound (10:30). It didn’t always ring true, but did make an interesting sound. At another point, Hsing (11:06) takes the glass-hit balls and makes them bubble to a stop against her paddle – it’s a familiar sound to any ping-pong player, but in this context makes a percussion sound that’s hard to duplicate otherwise. 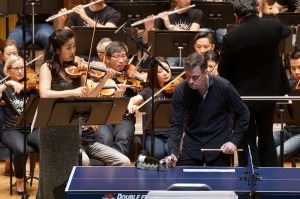 The first movement was the longest and ends with the performers just slamming the balls into the audience (13:08). Movement II (beginning 13:28) uses many of the same sounds as the first movement, now overlapping, rather than as separate sound events. A bass drum is put on the ping-pong table and while Cossin plays it (both the drum heads and the body: 17:02)), ping-pong is played around him. The tempos speed up and up and then it all becomes still and slightly melancholic with a harp solo (19:13). The noise resumes (21:43) now with Landers playing a ping-pong against the bass drum (the drum wins) and Hsing firing balls as hard as possible against the other side of the drum (22:18), letting them bounce where they will. The last movement (beginning 23:22) continues the ball versus bass drum, gradually speeding up, there’s a return to the game with frame drums, and then the whole piece ends with the violinist and the percussionist emptying the boxes of balls on the table (25:06). All sound ceases except for the sound of bouncing balls.

The piece was interesting but didn’t seem to have a satisfactory ending. Having once gotten on the speeding rhythmic train, Akiho didn’t seem to know how to stop it except by throwing everything off the train.