Puerto Rican / Spanish tenor Joel Prieto began his professional career 11 years ago and has moved from triumph to triumph. Early videos show his 2013 recital at Wigmore Hall in London, his performance in Vienna for Christmas that same year, his appearance at the Edinburgh Festival last year, and his Mozart performances of 2017. Earlier this year he performed the role of Belmonte in Mozart’s Die Entführung aus dem Serail, and in July will be Prince Tamino in Die Zauberflöte in Beijing.

It’s a role he’s done before, and this production is the ‘silent film’ styled one created by Barrie Kosky and the British 1927 group for Komische Opera Berlin. It’s done with barely moving actors against a stage-filling screen where they have to coordinate their actions with the film playing on the screen around them. Mr. Prieto spoke of the difficulty in getting through rehearsals. As can be seen from the opening scene, with Tamino’s first aria ‘Zu Hilfe’ – his running legs are film, while his upper body motion is all his own. 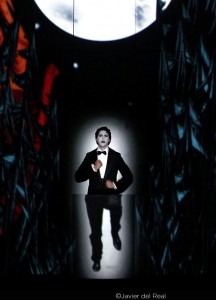 The arms aren’t in time with the music, and he said in early rehearsals he would often forget to move his arms when singing and then, with all the action, he was out of breath. Because his range of motion is limited and the singers on the upper levels are attached to the screen, the character must come from eyes and hand gestures, he said it has been one of the most difficult productions to learn. But, the audiences have loved it – productions are sold out and it’s been a great first opera for those new to the genre.

We spoke about his relationship with Mozart and he admitted that, according to his mother, he loved Mozart even in the womb – she was attending a film of The Magic Flute while pregnant and he was enthusiastic enough to make her think she had to leave the movie theatre. He could recognize Mozart’s music at age 2 and now, as a grownup, he’s sung in Don Giovanni (Don Ottavio), Die Entführung aus dem Serail (Belmonte), and now Die Zauberflöte (Prince Tamino).

We talked about the characters and agreed that Don Ottavio is the boring foil to the exciting Don Giovanni. He spoke about a Salzburg production by Claus Guth which was innovative in making Don Ottavio an accountant – at last he had a role in life that was more than just waiting around for Donna Anna (although in that production she kills herself at the end – the final ensemble was not performed). In Belmonte and Tamino, he has a more substantial character that he can bring something to.

Born in Spain, Mr. Prieto moved to Puerto Rico at age 4 and with his Spanish father and Puerto Rican mother, considers himself part of both countries. Mr. Prieto did his training at the Manhattan School of Music, which is where he met his current teacher, Patricia McCaffrey. It was at the Manhattan School and being in New York where he began to appreciate all that went into being an opera singer. He knew he wanted to be an opera singer from age 8, but now he had a view of all that went into that. The most obvious things, acting, language, and music, were the least of it. The travel and the solitude were something he hadn’t anticipated. Being able to attend the Met and other operas was one of the definite benefits of studying in New York.

We talked about what he’s learned over the past 11 years and he said the most important thing is not tie yourself up in knots comparing yourself with everyone else – each career is different and you must make your own independent journey.

Mozart isn’t his only repertoire, however. Future operas include Les Troyens (Iopas) in Dresden and Street Scene (Joe Kaplan) in Madrid. It’s a busy summer ahead for this rising tenor – keep an eye out for him at your local house!

The Magic Flute will be pefromed on the 21st and 23rd July at the Tianqiao Performing Arts Center in Beijing.