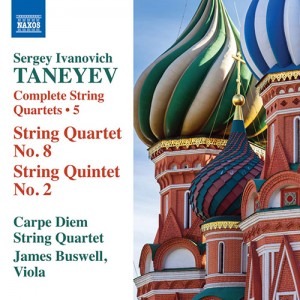 This is the fifth and final volume of Carpe Diem’s highly acclaimed cycle of Taneyev’s nine complete string quartets which are notable not only for the composer’s famed meticulous craftsmanship but for their attractive lyrical sweep. Infused with the spirit of Haydn and Mozart, the harmonically adventurous Eighth Quartet includes a beautiful and romantic Adagio. The Second String Quintet is a monumental work in every sense, standing firmly alongside the later quartets.