The next Covid-19 mutation is starting to rear its ugly spike. Depressingly, Omicron comes at a time when we thought that things were finally starting to look up. Every time I am looking forward to a little holiday under a palm tree or in the high Alps, the shutters of the world come crashing down again. As such, I am back to enjoying holiday travel through the eyes and sounds of eminent composers. Take the Elgar family, for example. During the 1890s the Elgar’s greatly enjoyed several alpine holidays in the Bavarian countryside. They loved the relaxed atmosphere, Austro-German musical culture and the “fact that Catholicism was the predominant religion.” 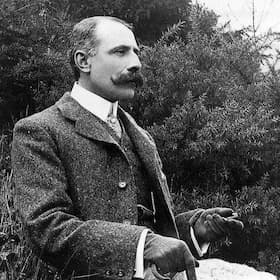 Elgar was overjoyed and wrote to a friend, “there were no Protestants… workmen carrying their rosaries…bells ringing at the elevation in the Mass at which people in the streets take off their hats and make the sign of the Cross…crucifixes on the roadsides…chapels to the blessed virgin.” The Elgars had discovered the area around Garmisch-Partenkirchen in upper Bavaria after attending three major Wagner performances at Bayreuth in 1892. They later traveled to Munich to hear a performance of Mascagni’s newest opera, Cavalleria Rusticana. Subsequently, they spent a few days in the Alps, and in the new landscapes “they encountered something revelatory…The Elgars were rewarded with an intensely diverse landscape, incorporating flower meadows, woods, marshes, rivers and lakes, interspersed with scattered hamlets and isolated farms against the impressive backdrop of the distant Alps.” 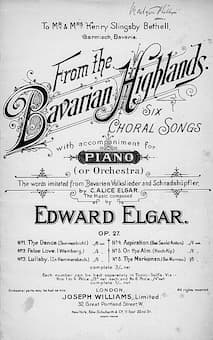 Edward Elgar: “From the Bavarian Highlands”

The Elgars fell in love with the Bavarian countryside, and returned to Garmisch-Partenkirchen four times over the next five years. Staying at the Villa Bader, a guesthouse run by Henry Slingsby Bethell and his wife Sarah, the alpine holidays also bore musical fruit. In 1894, the Elgars stayed for six weeks and embarked on major walking excursions and tours. Once they had returned home to Malvern, Alice Elgar wrote six poems in imitation of Bavarian folk verse, which her husband then set to music. Scholars suggest, “The composition of this song cycle was heavily influenced by Alice, who recognized that Elgar had received significantly more acclaim for his part-songs then his cantatas or oratorios and encouraged him to write shorter works that could sell better.” From the Bavarian Highlands was completed in April 1895, and Elgar conducted the premiere at the Worcester Festival on 21 April 1896. After being rejected by Novello, the London publisher Joseph Williams issued the set, which proved immediately popular. A number of arrangements for violin, cello and piano duet were rushed into print, and a German edition was published thereafter.

Come and hasten to the dancing
Merry eyes will soon be glancing
Ha! My heart upbounds!
Come and dance a merry measure
Quaff the bright brown ale my treasure
Hark! what joyous sounds!

Sweet-heart come, on let us haste
On, on, no time let us waste
With my heart I love thee
Dance, dance, for rest we disdain
Turn twirl and spin round again
With my arm I hold thee!

Down the path the lights are gleaming
Friendly faces gladly beaming
Welcome us with song
Dancing makes the heart grow lighter
Makes the world and life grow brighter
As we dance along!


The titles of the songs reference places and landscapes for which the Elgars had developed a particular fondness. In fact, the texts provide little verse postcards of the places they visited, with the opening “Schnadahüpfler” referencing a folk dance originating during harvest time. Generally it is a little four-line spontaneous ditty that includes a good bit of yodeling. “False Love,” meanwhile is set in the meadows around the village of Wamberg.

Now we hear the spring’s sweet voice
Singingly gladly through the world;
Bidding all the earth rejoice

All is merry in the field
Flowers grow amidst the grass
Blossoms blue, red, white they yield

As I climb and reach her door
Ah! I see a rival there
So farewell! for evermore

Ever true was I to thee
Never grieved or vexed thee, love
False, oh! false, art thou of me

Now amid the forest green
Far from cruel eyes that mock
Will I dwell unloved, unseen

Elgar composed “False Love” in modified strophic form, consisting of four verses, a repeated chorus, and a fifth verse to conclude the piece. Each verse contains the same melodic material with slight alterations in the vocal and choral accompaniment of the piece.


For his setting of “Lullaby,” draws a musical connection between two consecutive lines of the poem, “indicating the respective length of his phrases… Elgar is focused on the smallest details of the composition, including the difference between a voiced and an unvoiced consonant.”

Sleep, my son, oh! Slumber softly
While thy mother watches o’er thee
Nothing can affright or harm thee
Oh! sleep, my son

Vainly play
Zithers gay!
Here I stay
All the day


While based in Garmisch-Partenkirchen, the Elgars embarked on a week-long excursion to the Austrian side of the Alps. Before arriving in Innsbruck, they spend several days in the border town of Mittenwald and Oberammergau to hear the inaugural recital on a new organ at the Parish Church. “Aspiriation (bei Sankt Anton)” references a small village in the Tyrolean Alps, and the text suggests “a prayer uttered in a chapel on the top of the mountains.” 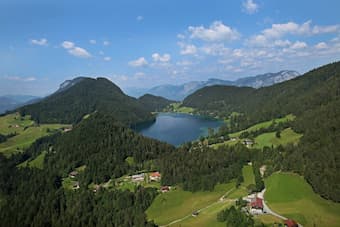 Over the heights the snow lies deep
Sunk is the land in peaceful sleep
Here by the house of God we pray
Lead, Lord, our souls today

Shielding, like the silent snow
Fall his mercies here below

Calmly then, like the snow-bound land
Rest we in his protecting hand;
Bowing, we wait his mighty will:
Lead, Lord, and guide us still


“On the Alm” presents us with a high altitude Alpine meadow, and the relationship between the countryside and a lover’s emotion is happy and unambiguous.

A mellow bell peals near
It has so sweet a sound
I know a maiden dear
With voice as full and round.

A sunlight alm shines clear
With clover blossoms sweet;
There dwells my maiden dear
And there my love I meet

There flying with no fear
The swallows pass all day
And fast, my maiden dear
Sees chamois haste away

I cannot linger here
I cannot wait below;
To seek my maiden dear
I, to the alm must go

The mountain’s call I hear
And up the height I bound;
I know my maiden dear
Will mark my Juchhé sound


The town of Murnau grew around a 12th century castle. Located on the edge of the Bavarian Alps and within walking distance of Garmisch-Partenkirchen, it is particularly noted for its annual hunting festival. As such, it’s not surprising that these festivities should find a place in Elgar’s Bavarian impressions.

Sure be each eye to-day
Steady each hand must stay
If in the trial we
Victors would be!

Sharp is the crack! ’tis done!
Lost is the chance, or won;
Right in the gold is it?
Huzza! the hit!

The sun will sink and light the west
And touch the peaks with crimson glow;
Then shadows fill the vale with rest
While the stars look peace on all below

In triumph then we take away
And with our prizes homeward wend;
Through meadows sweet with new-mown hay
A song exultant will we send

Elgar set his wife’s verses in the “spirit in which it was intended, enhancing the folk-inspired texts with light music of colour, confidence and, reflecting perhaps the greatest gift of these Bavarian holidays, genuine and unalloyed happiness.” Elgar, however, also saw the commercial potential of the work and arranged the songs 1, 3, and 6 as an orchestral suite published in 1901.