Artists Interviews
The Door to the Future: An Interview with Louis Langrée
by Maureen Buja February 7th, 2017 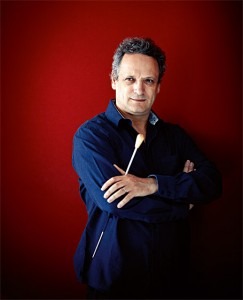 We spoke recently with Louis Langrée, Music Director of the Cincinnati Symphony Orchestra, about the CSO’s new recording, Concertos for Orchestra, modern and period orchestras, and the orchestra’s upcoming Asian tour.

Released on the CSO’s own Fanfare Cincinnati label on 17 November, Concertos for Orchestra follows the 2006 recording done by Paavo Järvi with the CSO of Bartók and Lutosławski’s Concertos for Orchestra. For the new recording, however, the three concertos for orchestra were newly commissioned works that extend the idea first developed by Belá Bartók in his seminal 1943 work. As Bartók noted: he called the piece a concerto rather than a symphony because of the way each instrumental section is treated in a soloistic and virtuosic way.

The three composers on the recording, Zhou Tian, Thierry Escaich, and Sebastian Currier, each embody a different compositional style. Zhou Tian did his training at the Curtis Institute of Music and then the Juilliard School before getting his D.M.A. at the University of Southern California. Zhou’s Concerto for Orchestra follows the classical fast-slow-scherzo-finale format, but his third movement Seeker’s Scherzo is like nothing you’ve heard in Haydn or Mozart. 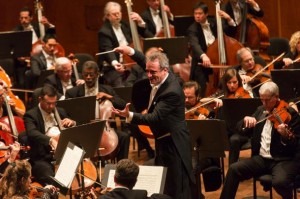 Sebastian Currier is another Juilliard graduate, with a long-established career as a composer, including receiving the Grawemeyer Award for Music Composition in 2007. The Grawemeyer Award is informally known as the ‘Nobel Prize for Music’. Currier’s contribution to the concertos for orchestra, FLEX, uses the entire orchestra as the ‘soloist’ in the first movement. Individual orchestral instruments take their turns “in the spotlight” with short virtuoso phrases, as if taking solo bows one after another, against the background of a rhythmic ostinato (“obstinately” repeated figure) in the strings.

Currier: FLEX: I. In the Spotlight
The entire recording is a tremendous contribution to the contemporary genre of concertos for orchestra.

We talked about the reception that new works received from the orchestra and from the audience. He said that both the orchestra and audience must be brave before approaching a new piece. The orchestra, in general, looks forward to new works. The audience fell into two camps: those who want new pieces to discover and those who crave their long-standing favourites. When he does the programming for a season, he takes both those viewpoints into consideration, recalling with delight that he’s conducted some 12 world premieres since becoming Music Director at Cincinnati.

Even when they do the old familiar works, new research is always taken into consideration. He spoke about how the CSO music librarians were working with, for example, the Gershwin estate to make sure that the version of An American in Paris that they will be playing next season takes into account the composer’s original MS and recordings.

Mr Langrée also spoke about the education he’s received in conducting orchestra with modern instruments and orchestras, such as Freiburg Baroque or the Orchestra of the Age of Enlightenment, that perform on period instruments. He said that conducting a work such as Beethoven’s Fidelio, where the writing for the horn required that pitches not present on the horn be created by hand-stopping the bell, the start of Act II in prison became a “festival of screams,” due to the cacophony when using original horns as they were intended. He also spoke about conducting Mozart’s Don Giovanni some 70 times before looking at the manuscript and rethinking some of his approaches.

For their upcoming Asian tour (the CSO will be in Hong Kong for the Arts Festival in March), the programme is a mixed American (Ives and Gershwin) and French (Saint-Saëns and Ravel) one. We spoke in particular about Gershwin’s Rhapsody in Blue, written in 1924 and orchestrated in 1942 by Ferde Grofé for the Paul Whitman Orchestra. Mr. Langrée hears a lot of Rachmaninov in the work and so is particularly pleased to have the Ukrainian pianist, Alexander Gavrylyuk, as the soloist. Playing a Russian-influenced piece with a Ukrainian pianist will bring out the foreign elements Langrée feels are in Gershwin’s work.

Mr. Langrée felt that his job as Music Director was to keep the audience’s ears open. Since artistic education is failing in the public schools, it falls to the orchestra to alert everyone to the message that music can bring. Music isn’t entertainment, it’s art. The more you know the better you can open the door to the future: for the orchestra, for the audience, and for music.