In Tune Sciences
Does Listening to Mozart Make You Smarter? The truth about the Mozart effect
by Desiree Ho December 22nd, 2010 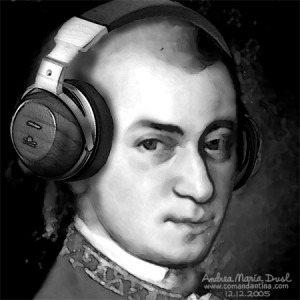 In 1993, Dr Frances Rauscher and her colleagues from the Centre of Neurobiology of Learning and Memory, University of California published a letter in “Nature” magazine that shook the music world. The report suggested that listening to Mozart’s music could temporarily raise spatial reasoning, and hence make people “smarter”. Although most people had little idea how this miraculous “Mozart effect” came to be, it was later explained that although Mozart’s music sounds simple on the surface, it is indeed composed with a certain level of complexity that can stimulate brain activity. The term was first coined by French researcher Alfred A. Tomatis, who attempted to cure a variety of disorders by using Mozart’s music as a listening stimulus.

Unfortunately, many people took this “increase in spatial intelligence” as an increase in IQ. This view was further popularized by the numerous articles that followed the finding. In 1994, Alex Ross of the New York Times wrote that “researchers have determined that listening to Mozart actually makes you smarter”, and even presented this as evidence that Mozart has dethroned Beethoven as “the world’s greatest composer”. In fact, a commercial set of Mozart’s recordings, related materials and books were turned into a US trademark by Don Campbell in the name of raising intelligence. He claims that the benefits of the Mozart effect reach far beyond improving spatio-temporal reasoning or raising intelligence, but also bring about improvements in health, education and overall well-being.


Well, so does listening to Mozart actually make you smarter? Let’s take a look at what the research results suggest.

Rauscher’s research investigated the effect of listening to Mozart’s music on spatial reasoning. Research participants were played three types of music—silence, repetitive relaxation music, and a sonata by Mozart. Then, participants were each given one of three standard tests in abstract spatial reasoning, as measured by the Stanford-Binet IQ test. It turned out that performance was improved after listening to Mozart’s music. However, the enhanced effect was regarded as only “temporary”, lasting only 10-15 minutes. It is important to highlight that the study made no claim regarding increasing general IQ, but only spatial intelligence scores.

In fact, research results further testing the “Mozart effect” have not been unanimous. Other research has found that listening to slow and sad classical music (regardless of whether it was Mozart or not), does not increase spatial intelligence, and may in fact interfere with it. People have therefore gone on to suspect that the Mozart’s music, or other classical pieces, do not in fact possess special powers. Rather, performance improvement in spatial ability tests are a result of increased relaxation and happiness to the listener caused by listening to music.

This point of view agrees with another piece of research, where a group of five-year old Japanese children were willing to sit down for a longer period during their drawing sessions while listening to children’s music. The content of their drawings also appeared to show a higher level of creativity. Likewise, other experiments have also shown that listening to rock music and other western classical music can also increase the thinking abilities.

In 1996, Hallam conducted an experiment through the British radio, involving 8000 10-11 year olds across Britain. The experiment split them into three groups. Each listened to ten minutes of Mozart, pop music or radio interviews. After listening, they did two spatial tests that involved tasks with origami and cubes.

The initial analysis pointed out that there was no evidence of the Mozart effect, but further analysis brought in even more astonishing results. In comparison, children who listened to pop music turned out to be better at handling the paper-folding task than those who listened to Mozart. As a result, it was concluded that regardless of whether one listened to children’s music or adults’ pop music, the effects appear to be the same. That is, anyone listening to music they like and enjoy, will gain a benefit to their intelligence, or so called increased “brain power”. But as to whether we should be playing Mozart, rock music, or pop music, well that’s up to the listener to decide.

To conclude, it appears that the famous Mozart effect simply became famous only because the idea had an obvious appeal to people who valued classical music. So how can we increase our brain power? Well, as with most things in life, simply listen to music you like and enjoy.