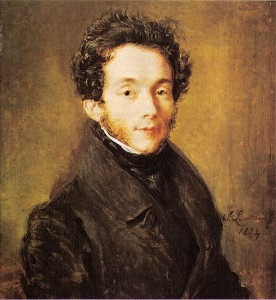 It is generally acknowledged that no single operatic composer influenced Richard Wagner as decisively as Carl Maria von Weber. When Richard was nine, Weber came to Dresden to rehearse and conduct his opera Der Freischütz. In his autobiography, Wagner gives a rather detailed description. “Weber’s features were really refined, delicate, and his intellectual appearance excited my ecstatic admiration. His narrow face and finely-cut features, his vivacious though often half-closed eyes, captivated and thrilled me; whilst even the bad limp with which he walked, and which I often noticed from our windows when the master was making his way home past our house from the fatiguing rehearsals, stamped the great musician in my imagination as an exceptional and almost superhuman being.” The impression the actual performances of Der Freischütz made on young Richard cannot be overstated. He obsessively longed to hear the music over and over again, forcing his sister and other pianists to endlessly repeat playing the “Overture” for him. When they finally refused, Richard began to take piano lessons himself. Not only that, when Weber died in 1826, he quickly decided to become a musician and composer.

Before Richard tried his hands at orchestral composition — he composed two overtures in C and B-flat respectively in 1830 — he first sought to emulate the piano music of his hero. In all, Carl Maria von Weber composed four piano sonatas between 1812 and 1822. Each sonata has been described as “a microcosm, or perhaps Singspiel, given the manner in which he manipulates passagework and thematic material, framing his ideas with a kind of compulsive symmetry.” Critics frequently berate Weber’s sonatas for lacking formal cohesion, yet young Richard unquestionably understood that these compositions are closely related to operatic conventions and the dramatic demands of narrative.

Richard’s first piano teacher bluntly told his young charge that nothing would ever come of him. Richard was furious, but later recalled, “Of course, the man was right… In all my life I have never learned to play the piano properly. Thenceforth I played for my own amusement; nothing but overtures with the most fearful fingering. It was impossible for me to play a passage clearly, and I conceived a great dread of all scales and runs.” His sisters, friends and colleagues teased him mercilessly, but Richard would proudly proclaim, “I play a lot better than Berlioz.” But then, everybody knew that Berlioz couldn’t play the piano at all! 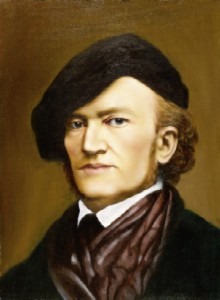 With his career as a pianist seemingly going nowhere, Wagner turned his attention to the wondrous world of the orchestra. “The mysterious joy I felt in hearing an orchestra play quite close to me still remains one of my most pleasant memories. The mere tuning up of the instruments put me in a state of mystic excitement; even the striking of fifths on the violin seemed to me like a greeting from the spirit world.” Wagner composed his only complete symphony in the summer of 1832, and the work was premiered on 15 December in Leipzig with Friedrich Wieck in attendance. His daughter Clara described the performance to Robert Schumann. “Listen! Herr Wagner has got ahead of you; a symphony of his was performed, which is said to be as like as two peas to Beethoven’s Symphony in A major.”

Although the influences of Beethoven and late Mozart are unmistakable, the orchestration clearly originates with Carl Maria von Weber. Weber completed his two symphonies in 1807. Critics described the first movement of his first symphony as “more of an overture than a symphonic movement,” and suggested that there was “room for improvement in the working out of the finale.” Although it falls flat when compared to Beethoven’s Eroica — composed only a couple years earlier — it nevertheless demonstrates the promise of how Weber and eventually Wagner would subsequently use orchestral passages in their respective stage works.

Richard spent his student days at the University of Leipzig drinking himself comatose and gambling away his mother’s pension. Nevertheless, the city also brought him in touch with the music of J.S. Bach and Ludwig van Beethoven. For more about that, please join me next time.