Many people, who are not “in the know” – and even some who are! – regard classical music as elitist and its practitioners as either formal and old-fashioned or pretentious so-and-so’s who have set themselves up as demi-gods, garnering praise and adulation wherever they go, and never stooping to acknowledge their adoring public who queue patiently at the green rooms of the concert halls of the world to meet them. Classical music has, until recently, not helped its cause: many of the “traditional” venues are frequented by mostly elderly people, who sit through the performance in hushed reverential silence, and who tut and purse their lips if anyone dares to applaud in the wrong place. Being surrounded by such people can be very off-putting for the classical music newcomer. Then there is the venue itself: the London’s Wigmore Hall is all Edwardian gilded curlicues and red-velvet plushness, with its extravagant floral displays and a gold rail along the front of the stage which serves to set the performers apart from the audience and further promotes an “us and them” attitude. 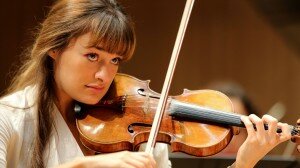 In reality, most professional musicians are fairly ordinary people who, through immense amounts of training and hard graft, can do extraordinary things with a mechanical contraption of wood and wires, scrape beautifully on a stringed wooden box, or blow down a metal pipe with valves. We tend to forget that these people are just doing their job: the difference is they do not spend hours at a desk in an office. Instead, they spend hours and hours and hours, often entirely alone, honing their craft. In addition, they often endure low pay, unsociable working hours, and exhausting travelling. Many professional musicians have families, just like the rest of us, they live in ordinary homes, in ordinary streets. Some may have a special room set aside for their activity, but many do not have that luxury.

Meet the soloist in the green room after the performance, and you generally find someone who is pleased to hear your experience of their concert, and who would prefer the adoring public to be a little less awestruck. Many people going backstage to meet the performer often say silly, nervous, or irrelevant things; or their anxiety about meeting the performer makes them tongue-tied. Sometimes people ask, with a weird, admiring light in their eyes, what it is like, being a concert soloist. Most performers will reply truthfully, downplaying the pleasures of a musical career, while emphasising the less glamorous aspects of the job. But more often than not, people coming to the green room are fresh, honest and spontaneous, and, for the performer, it must be gratifying to have one’s efforts measured against people’s responses.

Classical musicians are not stuffy! They are people, like you and me, who just happen to be able to create magical, wonderful sounds to delight, thrill, excite and move us.