In last month’s article I discussed the Symbolist influence on music and art in France at the turn of the 20th century. It is of interest to note that this influence also played a role in the works of the Lithuanian composer/painter Mikalojus Konstantinas Čiurlionis (1875-1911) and in the compositions of the Russian composer Alexander Skrjabin (1872-1915) – expressing similar ideas, but taking different forms. In this article, I will concentrate on the works of Čiurlionis, and in the next, on the works of Skrjabin.

Čiurlionis: In the Forest
The Sea 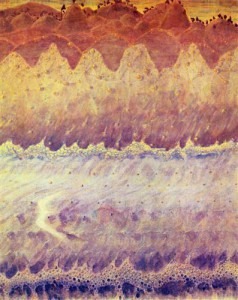 Čiurlionis started out as a composer and became a painter in his 30’s, creating a large body of over 300 works, but in a country which had just started to form a national identity. Influenced by French symbolism, he is considered the founder of the National Lithuanian School in painting and music, with his influence still felt in the Lithuanian musical and artistic circles to this day. His early music studies took him to Warsaw and Leipzig, which explains the influences of Chopin and Johann Sebastian Bach, whose work on counter-point Čiurlionis considered the foundation for contemporary music education. He was also fascinated by the works of Liszt, Berlioz and Strauss, whose influences can be felt in the orchestration of his composition ‘In the Forest’ (1902) and ‘The Sea’ (1903-08).

In Warsaw, he enrolled in the Painting Academy and, like Skrjabin, became interested in modern literature, i.e., the works of Ibsen, Strindberg, Tolstoy, Dostoevsky, Poe, and Nietzsche. After the Polish uprising of 1905, Čiurlionis returned to Vilnius and concentrated on musical compositions, harmonizing almost 60 Lithuanian folksongs, as well as exhibiting his paintings. 1908 finds him in St. Petersburg, frequenting the Diaghilev circle, where the exhibition of his painting cycle ‘Sonatas’ within the ‘Salon of Russian Painters’ — arranged by the Russian Symbolist painters Roerich and Benois — was received to great acclaim. On one of the Salon’s evenings for contemporary music, they also organized a performance of Čiurlionis’ piano cycle ‘Marios’. 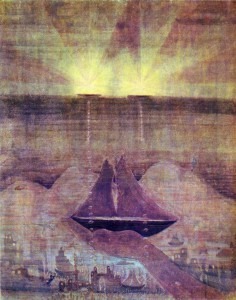 Almost all of Čiurlionis’ paintings’ titles reflect various movements of his compositions. In his ‘Sonata of the Sea’, the three paintings are titled ‘Allegro, Andante and Finale’ – each referring to the appropriate speed of the movement, i.e. the Allegro dynamic and impetuous, the Andante serene and calm, and the Finale solemn and slow. The painting, ‘Allegro’ shows four different levels, covered by a layer of droplets of amber (the Baltic ‘Gold’), with tiny images appearing within abstract layers, reflecting the layered construction of the musical movement. The second painting, ‘Andante’, shows a sunken city (theme from a Lithuanian folktale), the sea and the sky with a double sun (two eyes) and a ship (the mouth), which almost gives the allusion of a ‘cosmic’ face. The musical form of the ‘Sonata’ is shaped by a ‘basso ostinato’ as the first layer, by a Lithuanian song motive as the second one, and yet another melody as a third layer above it. The third painting, ‘Finale’, shows an immense wave which seems to engulf the small ships and the initials MKČ – almost symbolic for Čiurlionis death. The musical score reflects the rolling, engulfing wave, which is visible in the musical notation itself. Many of the paintings’ themes remain abstract and no real interpretation — even as the Lithuanian myths are concerned — can be envisioned or are even possible. 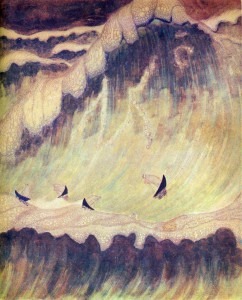 Moving from one painting to the next, grouped as a succession, we are made aware of the sequence of time, which has become ‘visual’ – just as we had seen in Monet’s series paintings of the ‘Rouen Cathedrals, Haystacks or Poplars’. Here, we can also make the connection to Baudelaire’s poem ‘Correspondances’ (‘Les Fleurs du Mal/The Flowers of Evil’) — where perfumes, sounds and colors respond to each other, and where the artist becomes the prophet and visionary between the seen and the heard. Čiurlionis’ works never depict an objective reality, but rather sonorous landscapes, and those often in muted, spiritual colors in blues and greens.

Čiurlionis is one of these rare artists, whose combination of music and painting foreshadows the ‘seriality’ of Schönberg in music on one hand, and the ‘abstraction’ of Kandinsky on the other — truly an artistic genius, well ahead of his time, who created the foundation of a Lithuanian national culture, in which the Eastern European Symbolist ideas survive, but also an artist who deserves a more prominent place in the world of art and music.