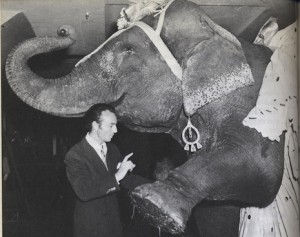 Do you know what happened when George Balanchine, tenderly referred to as the father of American ballet, teamed up with Igor Stravinsky? Unless you actually know the answer, this one is somewhat difficult to guess. Turns out, they were choreographing a performance for fifty elephants with fifty ballerinas on top of them for the Ringling Bros. Barnum & Bailey Circus. The work was called “Circus Polka: For a Young Elephant,” with music composed by Stravinsky. And just in case you were wondering, all the elephants wore pink tutus! 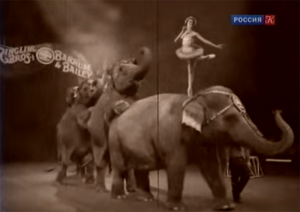 Stephen Walsh had provided an account of this rather unusual collaboration. Apparently, Balanchine telephoned Stravinsky from New York and told him that Ringling Brothers and Barnum and Bailey’s Circus had asked him to choreograph a polka for circus elephants. In turn, Balanchine wanted Stravinsky to compose the music. At a later date Stravinsky humorously recast the original conversation in the following terms. “I wonder if you’d like to do a little ballet with me, a polka perhaps,” Balanchine is supposed to have said. “For whom?” “For some elephants.” “How old?” “Very young.” After a short pause Stravinsky responded, “All right. If they are very young elephants, I will do it.” 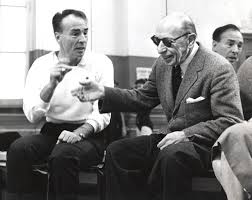 Stravinsky was still busy with other projects, but he rapidly composed the Circus Polka as a piano solo, and completed a draft score on 5 February 1942. And when Ringling asked for the full score for circus band, Stravinsky sought help from Robert Russell Bennet, the best-known Hollywood arranger of the day. “Bennett recommended a young composer called David Raskin—a pupil of Schoenberg, as it turned out, and already an experienced film writer—who duly orchestrated the polka for the bizarre combination of wind and percussion instruments (including Hammond organ) that Ringling had assembled for their circus performances.”

Two years later Stravinsky did arrange his Circus Polka for orchestra. The composer, however, never saw the danced performance, which premiered on 9 April 1942 at New York’s Madison Square Garden. And that’s probably a good thing, since all the elephants were of rather mature age, including “Old Modoc,” the chief and oldest elephant.