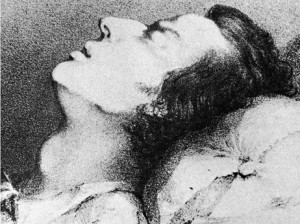 A good many people decide to plan proceedings for their own funerals. Among the various options and choices there is always the question if music should be part of the service, and if so, what that music might be.

With his health steadily deteriorating, Frédéric Chopin had some time to mull this specific question. With support from his student and patroness Jane Stirling, Chopin and his family members took an apartment at 12 Place Vendôme, in June 1849. Only his closest friends were admitted, although Pauline Viardot sarcastically remarked “all the grand Parisian ladies considered it de rigueur to faint in his room.” Chopin put his affairs in order, and on 17 October 1849, around 2 in the morning he died aged 39. 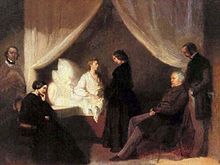 Chopin was horrified to be buried alive, so he requested that his body be opened after death, and his heart returned to the Church of the Holy Cross in Warsaw. And he requested that Mozart’s Requiem was to be performed at his funeral. But there was a problem! The Archbishop of Paris initially forbade the performance of the Requiem because women were not permitted to sing in the city’s parish churches. It took special pleas from Chopin’s most powerful friends and by the vicar of La Madeleine, where the service was to be held, before the Archbishop issued a special dispensation. 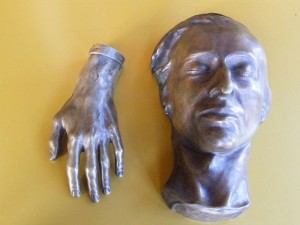 His decree did allow for female participation on the condition that the female participants remain invisible. In all practicality that meant that the women singers and soloists, including Jeanne-Anaïs Castellan and Pauline Viardot were hidden behind a black velvet curtain. While this issue was being resolved, Chopin’s embalmed body lay in La Madeleine’s for almost 2 weeks. When all was set and done, huge crowds poured into the square on 30 October 1849. The facade of La Madeleine’s was draped in black velvet with a cartouche bearing the silver-embroidered initials FC. Although admission was by invitation only, a large number of tourists filled the pews. In addition to the Requiem, an orchestral arrangement of the “Funeral March” from Chopin’s B-flat minor sonata, an organ arrangement of a couple of Preludes and improvised variations on themes by the composer also sounded.