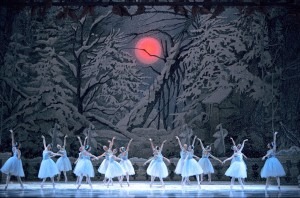 Around Christmas time, opera houses around the world open their stages to special seasonal productions. And it doesn’t get more festive than watching your favorite Christmas ballet! Combining highly technical performance dance, choreography, music and lavish costumes and staging, the hierarchy of Christmas ballets places the Nutcracker at the head of the class. It’s Christmas Eve, and the young protagonist Clara is given a nutcracker as a gift… The story originated with E.T.A. Hoffmann, and Tchaikovsky’s score, particularly the selections featured in the Nutcracker Suite, have become all-time favorites. Given its popularity, it’s hardly surprising that a large number of arrangements for various instrumental combinations and musical styles have been produced. Among the most upbeat and cheerful is the jazz arrangement by the bandleader Duke Ellington, recorded on the Columbia label in 1960.

Pyotr Il’yich Tchaikovsky: Nutcracker Suite, Op. 71a (arr. D. Ellington and B. Strayhorn)
Vaughan Williams was a Christmas fanatic. He admired the beauty and nobility of Christmas carols, and eventually edited the Oxford Book of Carols in 1928. Yet, Williams also had a keen interest in folk dancing. He was a founding member of the English Folk Dance Society, and once remarked, “People find in folk dance a spiritual exaltation, which they had found nowhere else.” His fascination with folk dance was coupled with an intense interest in ballet. He met with Diaghilev and Nijinsky in 1911, and the Bolm Ballet in Chicago first performed On Christmas Night in 1926. A free adaptation of Dicken’s A Christmas Carol, the principal characters include Scrooge, The Spirit of Christmas, Mr. and Mrs. Fezziwig, The Cratchit family, including Tiny Tim, the Three Kings and the characters of the Nativity. True to form, the score juxtaposes complex melodies with simply folk tunes and Christmas carols.

Vaughan Williams: On Christmas Night
Although he was a prodigious writer of plays, travelogues, novels and poems, the Danish author Hans Christian Andersen is best remembered for his fairy tales. The Little Mermaid, The Ugly Ducking and The Emperor’s New Clothes are easily accessible to children, but “present lessons of virtue and resilience in the face of adversity for mature readers as well.” As we all know, his fairy tales have inspired plays, animated and live-action films, and ballets. Among them is a short story called The Little Match Girl. On a cold Christmas Eve, a young girl tries to sell matches on the street. Suffering from hypothermia, the girl lights the matches to keep herself warm. In the glow of the fire she sees several visions, including a Christmas tree and a holiday feast. She also sees a vision of her grandmother, the only person to have treated her with love and kindness. She strikes one match after another to keep the vision of her grandmother alive, and when she runs out of matches, the girl quietly dies. Composer David Lang, who co-founded “Bang on a Can” in 1987, took this naive equilibrium between suffering and hope as the inspiration for his Little Match Girl Passion.

David Lang: Little Match Girl Passion
Sleeping Beauty, a ballet with music by Tchaikovsky and choreography by Marius Petipa premiered in St. Petersburg on 3 January 1890. Tchaikovsky apparently had premonitions that he was creating something special, as he excitedly wrote, “it seems to me, that this ballet will be among my best compositions. The subject is musically and with that special warm dedication and pleasure which are always a prerequisites for the quality of a composition.” Tchaikovsky was right, as the ballet was an overwhelming success and performances “endlessly sold out.” He even engaged the eighteen-year-old Sergey Rachmaninov, with help from the pianist Alexander Ziloti, to transcribe a suite for piano duet. “The transcriptions I received from you today,” Tchaikovsky wrote, “are magnificent, and I am terribly grateful to you, my dear, kind friend.”

Pyotr Il’yich Tchaikovsky: The Sleeping Beauty Suite, Op. 66a (arr. S. Rachmaninov for 2 pianos
The Nutcracker – The Waltz of the Snowflakes