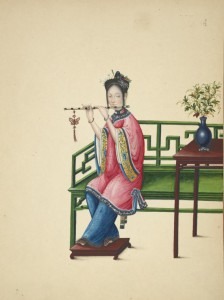 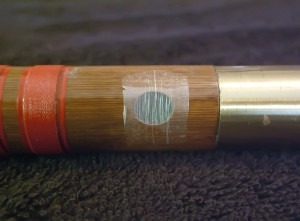 The mo kong covered with the dimo.

The dizi, also known simply as the Chinese Bamboo Flute, seems to have been in China for over 9,000 years. More than just a tube with holes, the dizi has a distinctive covered hole between the mouthpiece and the first key called the mo kong. This hole is covered with an extremely fine shaving from the inner skin of the bamboo, the dimo, which gives the dizi its distinctive buzzy sound.

Listen to the first appearance of the dizi here and note how different from a western flute the instrument sounds.

Free, single and double reed instruments made of bamboo are found all over China. The Bawu is a free-reed instrument, where a metal reed is attached under the mouthpiece, at one end of a closed bamboo tube. As the player blows into the instrument, the reed vibrates, creating the sound. In many ways, it is the sound of the bawu that people mistake for the sound of the dizi, but the bawu is more consistent in its timbre whereas the dizi and its dimo membrane has a more variable timbre. 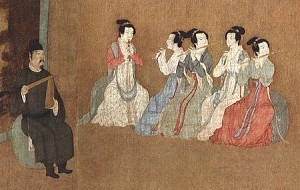 A double-reed much like the western oboe is the guan (or guanzi). It seems to have originated in northwestern China and was initially used for signaling. Eventually, its sound was calmed and it was used for ensemble music, often paired with dizi, often at the court.. This is a single tube of bamboo with a double-reed at one end. The instrument is very plain and is notable for how difficult it is to learn because of the amount of control the player needs to have. 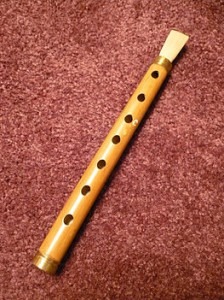 Anonymous: Flowing Water By Lofty Mountain (Jian Shi-yi – guanzi)
Another double-reed bamboo instrument but with a distinctive sound is the suona. Like the western oboe, the player holds the reed between his lips, but the conical structure of the suona, with its flaring bell, gives a sound that is much more metallic and exuberant than any oboe. 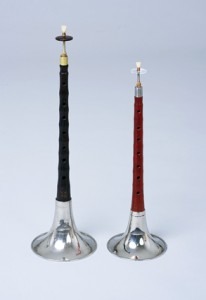