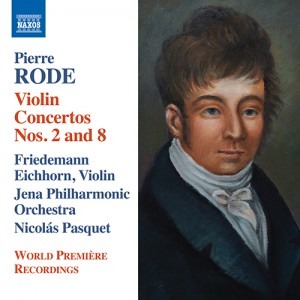 Pierre Rode was the star pupil of Viotti (the greatest violinist of the day), in time becoming the leading exponent of the French Violin School. A great virtuoso—he premièred Beethoven’s last Violin Sonata —he composed exclusively for his own instrument and his thirteen concertos, along with his Caprices, are his greatest compositional legacy. The Violin Concerto No. 2 is notable for its contrasts between challenging virtuosity and lyrical interludes, whilst Concerto No. 8 is one of his most beautiful works, with long-breathed melodies and dramatic flourishes. This is the fourth of five volumes containing all thirteen of Rode’s Violin Concertos.