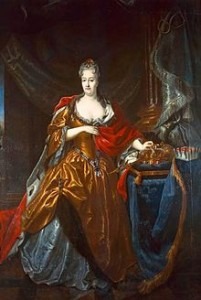 Christiane Eberhardine of Brandenburg-Bayreuth, Electress of Saxony and titular Queen of the Polish-Lithuanian Commonwealth, was a bit of a religious celebrity. For years she resisted the pressure of the court to embrace the Roman Catholic faith, which her husband had adopted in 1697. In order to become king of Poland, Augustus II the Strong, had converted to Catholicism, however, his wife remained faithful to her Protestant beliefs. She was not present at her husband’s coronation, and lived in voluntary exile in her castle at Pretzsch an der Elbe. Queen Christiane Eberhardine enjoyed immense popularity in Saxony as a symbol of Protestant faith, and preachers liked to portray her as a martyr, isolated as a virtual prisoner in her lonely castle. She was tenderly known as “Saxony’s pillar of prayer,” but suddenly and unexpectedly died on 5 September 1727 at age 56. The president of the Leipzig Deutsche Gesellschaft, Johann Christoph Gottsched and his student Hans Carl von Kirchbach organized a funeral ceremony planned by Leipzig University on 17 October. And the highest-ranking musician in town, Johann Sebastian Bach was asked to compose music for a large-scale cantata of mourning.

Johann Gottlieb Görner, the music director at the University lodged a protest with authorities, demanding that the commission be withdrawn from Bach and given to him. After much discussion, Görner’s petition was defeated and Bach was left with only a couple of days to compose the music for this ten-movement work! Initially, however, Bach had to adjust the text, as Gottsched’s original poem unfolded in nine verses of eight lines each. Originally, Bach conceived the work as a set of four paired recitatives and arias for soprano, alto, tenor and bass. Three massive choruses would begin and end part 1, and provide the conclusion for part 2. Since there is no aria for bass, we can reasonably assume that Bach simply ran out of time. Modeled after a grandiose funeral cantata in the Italian style, Bach provided music of matchless splendor. By expanding the standard orchestra of transverse flutes, oboes d’amore and strings by two violas da gamba and two lutes, Bach created a highly distinctive and somber ceremonial sound.
Johann Sebastian Bach: Laß Fürstin, laß noch einen Strahl, BWV 198 (Trauer-Ode)
The ceremony took place on 17 October 1727, and “Herr Bach conducted the performance from the clavicembalo, among the musicians in the gallery.” The Leipzig chronicler Christoph Ernst Sicul reported the event in considerable detail: “In solemn procession, while the bells were rung, the Town Officials and the Rector and Professors of the University entered St. Paul’s, where many others were present, namely, princely and other persons of rank, as well as not only Saxon but also foreign Ministers, Court and other Chevaliers, along with many ladies. When everyone had taken his place, there had been a prelude by the organ, and the Ode of Mourning written by Magister Johann Christoph Gottsched, member of the Collegium Marianum, had been distributed among those present by the Beadles, there was shortly after heard the Music of Mourning, which this time Capellmeister Johann Sebastian Bach had composed in the Italian style, half being heard before and half after the oration of praise and mourning.” The original performing parts have not survived, but Bach later borrowed from the cantata for his St. Mark Passion—a setting that has regrettably been lost—and for another funeral ode Klagt, Kinder, klagt es aller Welt, BWV 244a.
Thee Trauer Ode will be performed at the Musikfest Bremen on 9 September 2016 by
Philippe Herreweghe with the Collegium Vocale Gent.
Official Website