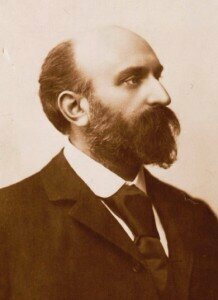 Another composer who gave up his father’s dream that he become a lawyer, the French composer Ernest Chausson (1855-1899) completed his studies, was admitted to the bar, but found writing, drawing, and especially composition much more to his liking. In the salons of Paris, he met the painters Henri Fantin-Latour and Odilon Redon, and composer Vincent d’Indy. Finally, at age 24, he started attending the classes of Jules Massenet at the Paris Conservatoire.

Massenet thought him ‘a true artist,’ and encouraged his writing. A fellow student who became a life-long friend was César Franck. Son of wealthy parents, his Paris salon welcomed the great artists of his time, including not only composers but also painters, poets, and novelists.

Chausson died, unexpectedly, in 1899 in a bicycling accident, when his ride down a hill ended in a brick wall. Just as they attended his salons, the artists of the day came to his funeral, including Debussy, with whom he’d had a falling out over Debussy’s love life.

Along with his studies at the Paris Conservatoire, Chausson also studied the music of Wagner, travelling to Bayreuth to hear the master’s works first with d’Indy and then with his new bride on their honeymoon in 1882.

Chausson’s work Poème de l’amour et de la mer (Poem of Love and of the Sea) was composed between 1882 and 1892. An orchestral song cycle, the work has two outside vocal pieces, La Fleur des eaux (The Flower of the Waters) and La Mort de l’amour (The Death of Love), separated by an orchestral interlude.

The first song, about the scent of lilacs, brings to the poet’s mind his beloved. Unfortunately, as he has not yet met her, it will be the scent of lilacs that will tell him of her approach. The setting is simple, yet Chausson introduces rhapsodic climaxes that are the reset by sections of tranquillity.

Chausson set only two of the original five verses, but captured the heart of the poem in those verses.

No. 2. Interlude
Having found his love, presumably during the Interlude, the poet casts everything aside in the second poem. Now all the flowers are dead – Spring has passed and with them the lilacs, roses, and carnations. The sky no longer takes its colour from her eyes, the wind has changed and ‘the time of lilacs and roses, along with our love, is dead forever.’

No. 3. La mort de l’amour: Le temps des lilas
He mourns the death of his love, but in the true Romantic manner, has to bring in all nature to signal that death.

The work was given its premiere in Brussels in1893 with Chausson at the piano, and was given its orchestral premiere 6 weeks later in Paris. There are elements of Chausson’s work that resonate of Franck and yet, at the same time, hints of Wagner’s Parsifal. It remains a unique composition – a song cycle of two songs but written at the size of a symphony.