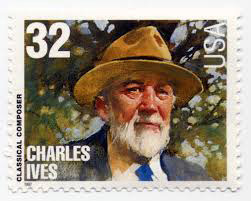 With his father the most influential musician in the Danbury Connecticut region, it’s no wonder that Charles Ives started his musical education at an early age. While his father hoped that Charles would pursue a career as a concert pianist, Charles specialized in the organ. Even more remarkably, Ives Charles decided to sacrifice his musical career and go into business. On short notice he left Yale University and moved to New York City to take up a job as a lowly paid clerk with the Mutual Life Insurance Company. Charles reasoned, that if a composer “has a nice wife and some nice children, how can he let them starve on his dissonances?” Charles would eventually have a nice wife and some nice children, and he certainly had a gift for doing business. He rapidly rose in the insurance ranks and by 1907 together with his partner Julian Myrick had founded his own company Ives & Co. In no time at all, Ives & Myrick became the largest insurance agency in the United States, particularly famous for their spectacular profits and Ives’s innovative ideas about selling and trading.

Ives appeared to have been highly skilled in training a professional sales force, and the firm established a dedicated school for insurance agents. His innovative use of a network of trained sales agents made his agency one of the most profitable companies in the country. Both partners were increasingly well rewarded for their efforts, and in 1913, Ives reported a personal income of $10,342, which had risen to $30,000 in 1918. Just in case you are wondering, that’s worth about half a million dollars in 2015! Ives real claim to fame in the world of business, however, was the introduction of his concept of estate planning. In his 1910 pamphlet entitled Life Insurance: The Amount to Carry and How to Carry It, Ives detailed the process of anticipating the disposal of an estate during a person’s life. Revised a decade later, it would prove to have far-reaching effects on the entire insurance industry. His employees remember Ives as an unusual boss, who in his shy and retiring way was able to inspire his workforce. “When Ives talked with someone,” according to one of his workers,“ he elevated them. It’s very hard to describe, but he made everyone feel important.” By all accounts, Ives strongly believed that “there was not a service that I could render to my fellow man that was more important than the business of life insurance, because it instilled in the soul and mind of my fellow man the responsibility of meeting his obligations.”

Charles Ives: Symphony No. 1
Many of his artistic and spiritual ideals started in business. In a famous paragraph he writes, “My business experience revealed life to me in many aspects that I might otherwise have missed. In it one sees tragedy, nobility, meanness, high aims, low aims, brave hopes, faint hopes, great ideals, no ideals… And it has seemed to me that the finer sides of these traits were in the majority. The fabric of existence weaves itself whole. You cannot set an art off in the corner and hope for it to have vitality, reality and substance. There can be nothing exclusive about a substantial art. It comes directly out of the heart of experience of life and thinking about life and living life. My work in music helped my business and work in business helped my music.” His compositions, whether large or small, complex or simple, radical or traditional are based on the dialectic of opposites he lived every day. For everybody around him, his frequently spiky compositions were seen as an eccentric hobby. In 1927, he tearfully told his wife, “I can’t seem to compose any more. I try and try and nothing comes out right.” Three years later he resigned from the insurance agency he had built. His music really only gained popularity towards the end of his life and he was awarded a Pulitzer Prize in 1947 at the ripe old age of 73.