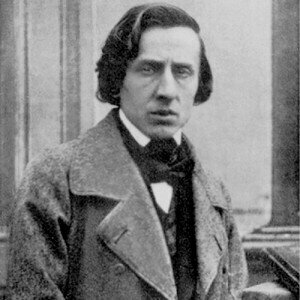 Chopin’s unique way of writing for the piano fundamentally changed how performers and composers thought about the instrument. His legacy was treasured in numerous compositions throughout the 19th century, and it remains colorfully vibrant in the concert repertoire of today. Chopin made the acquaintance of Robert Schumann and his future wife Clara Wieck in Leipzig. Schumann commented on this visit, writing to Heinrich Dorn: “The day before yesterday, just after I had received your letter, who should enter? Chopin! This was to me a great delight. We passed a very happy day together… he played in addition to a number of Etudes, several Nocturnes and Mazurkas—everything incomparable. You would like him immensely.” 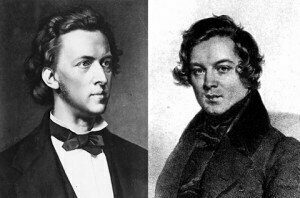 Schumann did much to popularize Chopin’s work in Germany, and his critically acclaimed “Hat’s off, gentlemen: A genius,” in relation to Chopin’s Opus 2 is legendary. Chopin, on the other hand, was not impressed. Although his name and musical style was immortalized, he declared Schumann’s Carnaval to be “not real music at all.” Possibly, by looking at a musical mirror Chopin perceived a “musical Chopin” that he did not like altogether. Be that as it may, Alexander Glazunov paid homage to both Schumann and Chopin in his orchestral arrangement! 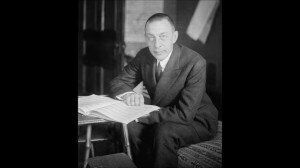 It is easy to see why Sergei Rachmaninoff based his first large-scale work for solo piano on the C minor prelude from Chopin’s Op. 28. He clearly attempted to compose a work showcasing his unique pianistic abilities, and also to display his skills as a composer. In fact, Rachmaninoff’s playing produced a velvety lyrical tone quality that was thought to be not unlike Chopin’s playing. Arthur Rubinstein wrote: “He had the secret of the golden, living tone which comes from the heart … I was always under the spell of his glorious and inimitable tone. From these barely moving fingers came a bronze-like sonority and an accuracy bordering on infallibility.” The set of Chopin variations dates from the summer of 1902, and was composed shortly after returning to the family estate from a lengthy honeymoon abroad. First performed on 10 February 1903 in Moscow, critics found it excessively long and repetitive. Always susceptible to criticism, Rachmaninoff decided to make three variations and the coda optional for performance.

Sergei Rachmaninoff: Variations on a theme of Chopin, Op. 22 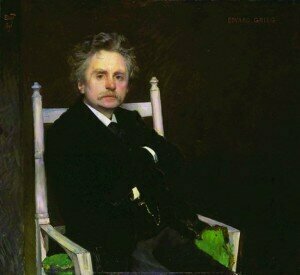 Edvard Grieg once wrote, “I cannot be blamed if my music is played in third-rate hotels and by schoolgirls. I could not have created my music any other way, even though I did not have my audience in mind at the time. I suppose this popularity is all right, but it is dearly bought. My reputation as a composer is suffering because of it, and the criticism is disparaging.” An increasing number of critics, particularly during the composer’s final years, questioned his abilities and talent as a composer. Grieg was understandably hurt by these skeptical and condescending attitudes, and he produced very little during his twilight years. The notable exception is a set of miniatures titled Stimmungen (Moods) published as Op. 73. Musically portraying some of the musical, literary and nationalist influences of his life, the “Study (Homage to Chopin),” is based on his initial 1867 sketches for his first set of Lyric Pieces. Listening to the lyrical cantabiles and the deliciously and subtle changes of harmony, it is not difficult to hear why Grieg has been called the “Chopin of the North.” 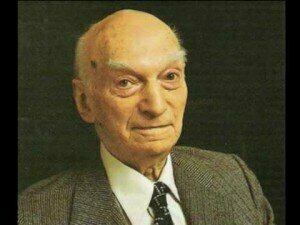 The Catalan composer Frederic Mompou (1893-1987) created a small but highly personal body of piano miniatures and songs. He started and ended his musical career in Barcelona, but spent three decades of his life in Paris. Particularly noteworthy was his friendship with the painter Mirò, “sharing a sense of surface simplicity with reliance on distinctive symbols or gestures drawn from their Catalan environment and folklore.” During his time in Paris, Mompou studied with Ferdinand Motte-Lacroix, who had studied with one of Chopin’s students. In 1938, the cellist and composer Gaspar Cassado suggested the possibility of collaborating on a set of variations for cello and piano based on Chopin’s Prelude Op. 28, No. 7. Mompou initially composed four variations, but then the project was abandoned. It took a 1957 commission from the London Royal Ballet to finish the work in solo piano form. In the event, Chopin’s music is filtered through a number of musical influences that includes Debussy, Satie and Gershwin, but sincere and direct emotion remains at the center of Mompou’s musical world.