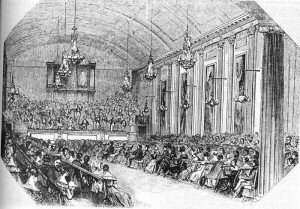 The concert rooms at Hanover Square where the chandeliers fell.

Many of Franz Joseph Haydn’s symphonies have nicknames, sometimes for the circumstances, such as “The Miracle” in Symphony No. 96, where the audience, in moving forward to greet the great man in London wasn’t in their seats when the overhead chandelier came down, Although it has been shown by later research, that the chandelier collapse actually came during the premiere of his Symphony No. 102, No. 96 has kept the name.

The Bear and the Hen were both part of the six-symphony cycle that Haydn was commissioned to write in 1786 for a popular concert subscription series in Paris. These “Paris” symphonies were written to show off the particular capabilities of a French orchestra, which we hear immediately at the beginning of this work. The first movement begins with a ‘premier coup d’archet,’ where all the strings have a unified attack at the beginning of a work.

III. Menuet
It’s the fourth movement, however, that gives this symphony its nickname. The opening imitates a country bagpipe, or dudelsack, and seems also to imitate the kind of music used to accompany dancing bears, a popular entertainment. 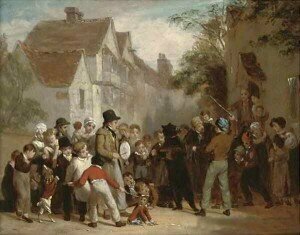 IV. Finale: Vivace
It wasn’t Haydn, however, who gave the work this nickname. It seems to have come from a piano arrangement of the symphony done in 1829 which gave it the name of “Danse de l’Ours” (Dance of the Bears).

The Hen Symphony was called so after the second theme (01:11) of the first movement where the repeated string accents seem like chickens pecking in the yard. 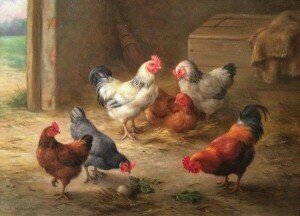 Haydn: Symphony No. 83 in G Minor, Hob.I:83, “La poule” (The Hen): I. Allegro spirituoso (New York Philharmonic Orchestra; Leonard Bernstein, cond.)
As a contrast with the serious and rather old-fashioned first theme, the second theme is a light refreshment, particularly when it reappears in the development section (03:32) and it seems that we have chickens running everywhere.

The fourth movement of the symphony also seems infected with chickens running around, but we may hear that only because of the first movement!

IV. Finale: Vivace
It’s interesting to note how many of Haydn’s symphonies were given nicknames. Nearly a third of his 104 symphonies have titles, very few of them by Haydn himself. We have the Morning, Noon, and Evening symphonies (Nos. 6-8), the Philosopher (No. 22), the Surprise (no. 94) and so on. Next time you hear a new piece of music, see if there’s a nickname you can apply to it!