Blog
Cats and Dogs in Concerts—Oh My!
by Janet Horvath March 7th, 2020 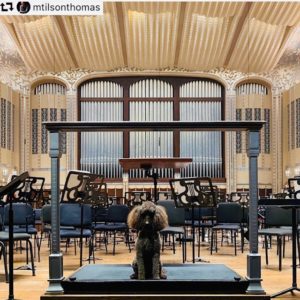 When I was a student at The Aspen Music Festival and School, the conductor and music director at the time, Jorge Mester, brought his fluffy English Sheepdog to rehearsals. The enormous dog loved to stretch out on the podium while Mester conducted. Of course, we students were delighted to see how mellow he was, and we knighted him our favorite music lover.

Conductors love their dogs and San Francisco Symphony’s Michael Tilson Thomas recently posted this perfect portrait calling him, “The real maestro of the family!” Oreo, my dog, tends to hang out at my feet when I practice. He was recently quite concerned my endpin might slip, so he sat on it. 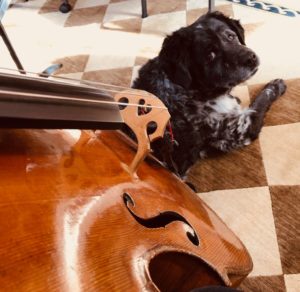 Cats are not immune to the wiles of music. They love to crawl into cases—guitar, cello, violin, any will do. A space to catch a nap, be serenaded, or do they really want to replace your instrument? Perhaps they’re jealous of the time you spend with your instrument?

Recently, both cats and dogs have been more forward. They seem to have their opinions about the performances they’ve attended.


Music-loving animals thrive in Turkey. A Labrador nabbed the best seat in the house during a concert in Ephesus, Turkey in 2017—right by the concertmaster. The orchestra was performing one of my favorites, Felix Mendelssohn’s Symphony No. 4 in A, Op. 90 “The Italian”. The dog obviously agrees with me. Either he has refined tastes, or he appreciates the applause, but he certainly stole the show. 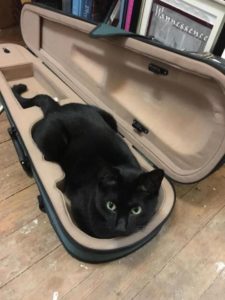 Cat in a case

More recently, during a concert in February of the CRR Symphony Orchestra, whose home is in Istanbul’s Cemal Reşit Rey Concert Hall (CRR), a cat appeared onstage waiting patiently for the orchestra members to come onstage. Evidently smitten with the cellos, she wandered into the cello section. But a couple of musicians insisted on petting her. In a huff, she meandered into the violin section, but someone there tried to grab her. For a moment, she disappeared into the wind section. The conductor had just turned to the audience, asking, “Is anyone allergic?” when the cat leaped onto the podium. This caused a lot of laughter from the audience. “What are we going to do now?” he asked. “I guess play…” and he began to conduct the Overture to Orpheus in the Underworld, by Jacques Offenbach. The piece begins with a brief orchestral flourish, a clarinet and oboe solo, followed by a lovely cello solo. I wonder if all the merriment onstage made the principal cello more nervous? 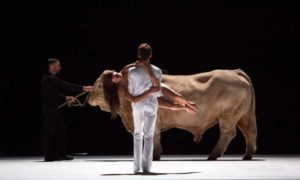 Lest you think animals onstage are a rarity, they are sometimes onstage on purpose. In 2016 Dutch composer Louis Andriessen’s opera De Materie called for 100 sheep to graze the stage. The libretto includes poetry by Willem Kloos and prose by Marie Curie. I wonder where they waited for their big entrance? In any case, during the fourth act, the 100 creatures arrived stage-left—a long way from their home in Pennsylvania.

In 2011 The Seattle Opera decided a real donkey and a horse was essential for their production of Massenet’s Don Quixote. In Cervantes’ novel, the animals are essential characters. The opera singers who played The Don and his sidekick Sancho Panza rehearsed in the stables, gradually befriending Mille and Desperado, and tentatively at first, learned how to ride them. Evidently, these animals are also big opera fans, and they milked their debuts on the opera stage with no untoward “movements” in front of the public.

Despite its thorny 12-tone style, Arnold Schoenberg’s Moses und Aron, is a masterpiece, and affords plenty of opportunity for the imagination of the stage director. During the second act, Moses ascends Mount Sinai. Although initially the crowd of Israelites wait patiently, their boredom encourages bad behavior. Soon they yearn for a more definite deity to worship and they fashion an enormous golden calf. During the 2015 production, directed by Italian Romeo Castellucci, The Opéra Nationale de Paris used an animal as close to a live golden calf as possible—a Charolais ox weighing one and a half tons. His two handlers were nearby backstage, but from all reports the ox was mellow.

Aida, Giuseppe Verdi’s grand opera, has long tended toward exotic interpretations of ancient Egypt, and the Metropolitan Opera has frequently used live animals, even elephants, onstage. In this version from 2012 of the Triumphal March, cast members rode in on horses. Note the trumpet playing members of the MET orchestra onstage, in full costume.

Animals have often been depicted as music stars in animated films. Here’s a mini one-minute opera, composed by Vincenzo Bellini and performed by The Orchestra of the Welsh National Opera. Frogs, squirrels, and birds? Oh my.