The Ride of the Valkyries from a helicopter, the William Tell Overture for a merry-go-round, Barber’s Adagio for Strings in a barbershop while the violinist gets a shave, the New World Symphony on the Star Ferry, performances on a double-decker bus, on the Ding Ding, and in front of the aquarium at Ocean Park.

This from the amazing Hong Kong Festival Orchestra and Festival Voices in the video celebrating their fifth anniversary. 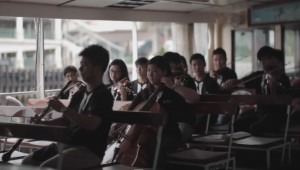 Founded in 2009 with their first performance in 2010, the Hong Kong Festival Orchestra is presenting some of the most interesting programming to be found in Hong Kong. The orchestra advertises for members in January, auditions them, gathers them for a two-week intensive set of rehearsals in July, and then produces two concerts in August. Their membership ranges in age from a 13-year-old who’s passed his London Trinity exam to 40-, 50-, and even 60–year-old players. The average age of the orchestra is 25.

All of this tells you that this isn’t your average festival orchestra. Founder Sean Li looked at all the musicians in Hong Kong who had done their years of study but hadn’t been able to become music majors but were now in banking, law, and many other professions. Once they left school, there really weren’t any more music outlets for them and that’s why he created the HKFO.

This orchestra is truly trying to be the local orchestra for Hong Kong. The emphasis within the orchestra is for local players. The orchestra benefits from all those Hong Kong Tiger Mothers who pushed their children into music lessons in the 1980s and 1990s and then made them become business majors at university. 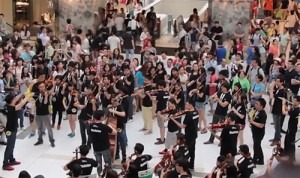 Being outside the mainstream of the Hong Kong classical music scene, they have also been free to become much more innovative than other Hong Kong classical orchestras. In 2013, they brought together the orchestra as a flash mob performing the Ode to Joy at one of the local malls in the New Territories. What’s interesting is to watch the audience: they gather and gather and whip out their cell phones to recording this event, ending with a cheer and applause. The other wonderful part is when the chorus, which has been casually gathering on an upper balcony, whips off their coats to display their “Musician” T-shirts and launches into their part, singing first in Cantonese, then in German. 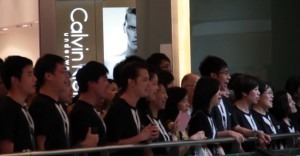 HK Festival Voices launch into
the Ode to Joy

This summer’s concert pair, entitled Requiem for a Dream takes its title from the movie of the same name about addiction. The first concert uses Berlioz’ Symphonie fantastique as its focal point where it’s an overdose of opium that sets our (anti-)hero off on his story of Boy Meets Girl, Boy Dances With Girl, Boy Kills Girl, finishing Boy has His Head Cut Off and an ominous Witches Sabbath. Brahms’ Tragic Overture and Elgar’s minor-key Cello Concerto fill out the program. It’s not so much a dream as a nightmare! The second concert is devoted solely to Berlioz’ Requiem, which hasn’t been performed in Hong Kong for over 20 years. This calls for tremendous forces: 16 trumpet players in the orchestra and 4 brass choirs, 12 horn players, 8 bassoonists, and 10 pairs of cymbals. In a city that’s overrun with violinists and pianists (thank you Tiger Mothers!), finding all the brass was a challenge, but one that has been met.

This is truly an orchestra that could benefit from more support – it’s probably the one orchestra in town that survives solely on its ticket sales – and we sincerely hope that they are able to succeed in their plan to help everyone get back into music. Keep August 24 and 25 free for conductor Vassily Sinaisky leading the HKFO and Voices in two remarkable concerts.